The amygdala; (Latin from Greek meaning 'almond', 'tonsil') is one of two almond-shaped clusters of nuclei located deep and medially within the temporal lobes of the brain in complex vertebrates, including humans.

Shown in research to perform a primary role in the processing of memory, decision-making and emotional responses (including fear, anxiety, and aggression), the amygdalae are considered part of the limbic system.

In one study, electrical stimulations of the right amygdala induced negative emotions, especially fear and sadness. In contrast, stimulation of the left amygdala was able to induce either pleasant (happiness) or unpleasant (fear, anxiety, sadness) emotions. Other evidence suggests that the left amygdala plays a role in the brain's reward system.

Each side holds a specific function in how we perceive and process emotion. The right and left portions of the amygdala have independent memory systems, but work together to store, encode, and interpret emotion.

The right hemisphere is associated with negative emotion. It plays a role in the expression of fear and in the processing of fear-inducing stimuli. This emotional response conditions the individual to avoid fear-inducing stimuli and more importantly, to assess threats in the environment. 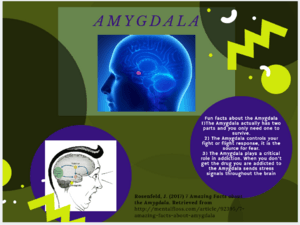 The right hemisphere is also linked to declarative memory, which consists of facts and information from previously experienced events and must be consciously recalled. It also plays a significant role in the retention of episodic memory. Episodic memory consists of the aspects of memory, permitting you to recall your personal emotional and sensory experience of an event.

This type of memory does not require conscious recall. The right amygdala plays a role in the association of time and places with emotional properties.

The amygdala is also involved in the controlling of memory consolidation, following any learning event, the long-term memory for the event is not formed instantaneously. Rather, information regarding the event is slowly assimilated into long-term (potentially lifelong) storage over time. 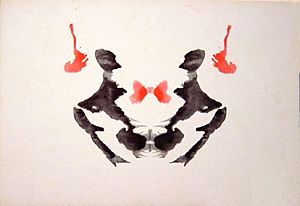 Research using Rorschach test blot 03 finds that the number of unique responses to this random figure links to larger sized amygdalae. The researchers noted that unique responses were observed at a higher frequency in the artistic population than in the non-artistic population, this suggests that amygdala enlargement in the normal population might be related to creative mental activity.

A variety of data shows the amygdala has a role in mental states, and is related to many psychological disorders. Some studies have shown children with anxiety disorders tend to have a smaller left amygdala. The left amygdala has been linked to social anxiety, obsessive and compulsive disorders and [[PTSD|post traumatic stress].

In a 2003 study, subjects with borderline personality disorder showed significantly greater left amygdala activity than normal control subjects. Some borderline patients even had difficulties classifying neutral faces or saw them as threatening. 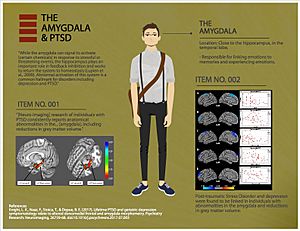 Individuals with psychopathy show reduced responses to instructed fear cues than otherwise healthy individuals. In 2006, researchers observed hyperactivity in the amygdala when patients were shown threatening faces or confronted with frightening situations.

Depressed patients showed exaggerated left amygdala activity when interpreting emotions for all faces, and especially for fearful faces. This hyperactivity was normalized when patients were administered antidepressant medication.

The amygdala has been observed to respond differently in people with bipolar disorder. A 2003 study found that adult and adolescent bipolar patients tended to have considerably smaller amygdala volumes and somewhat smaller hippocampal volumes. Many studies have focused on the connections between the amygdala and autism.

All content from Kiddle encyclopedia articles (including the article images and facts) can be freely used under Attribution-ShareAlike license, unless stated otherwise. Cite this article:
Amygdala Facts for Kids. Kiddle Encyclopedia.