An Sgùrr (Eigg) facts for kids

An Sgùrr is the highest hill on the Inner Hebridean island of Eigg, Lochaber, Highland, Scotland. It was formed 58.72 ± 0.07 million years ago; the result of one of the last eruptions of a volcano, the core of which now forms the Isle of Rùm. Thick viscous pitchstone lava of rhyodacitic composition flowed out, filling a river valley. The lava cooled and formed column-like structures, similar to those at Giant's Causeway. 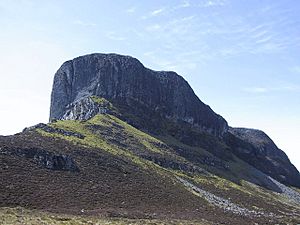 The peak is most frequently climbed from the ferry terminal at Galmisdale on the southeast corner of Eigg. A rough track heads west, passing between the northern side of An Sgùrr and the shoreline. About three-quarters of the way along the side of the ridge there is a gully; a fairly easy scramble allows access to the summit ridge. The route now almost doubles back on itself, heading east to reach the summit, which is crowned by a trig point. The climb, from ferry terminal to the Nose of An Sgùrr and back, takes at least 4 hours.

An Sgùrr is also known as the Sgurr of Eigg.

All content from Kiddle encyclopedia articles (including the article images and facts) can be freely used under Attribution-ShareAlike license, unless stated otherwise. Cite this article:
An Sgùrr (Eigg) Facts for Kids. Kiddle Encyclopedia.