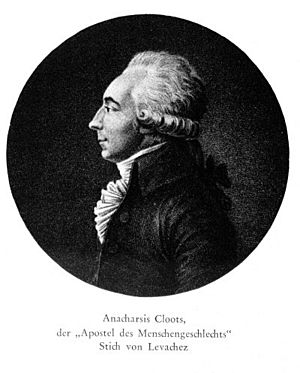 Jean-Baptiste du Val-de-Grâce, baron de Cloots (24 June 1755 – 24 March 1794), better known as Anacharsis Cloots (also spelled Clootz), was a Prussian nobleman who was a significant figure in the French Revolution. Perhaps the first to advocate a world parliament, long before Albert Camus and Albert Einstein, he was a world federalist and an internationalist anarchist. He was nicknamed "orator of mankind", "citoyen de l'humanité" and "a personal enemy of God".

All content from Kiddle encyclopedia articles (including the article images and facts) can be freely used under Attribution-ShareAlike license, unless stated otherwise. Cite this article:
Anacharsis Cloots Facts for Kids. Kiddle Encyclopedia.