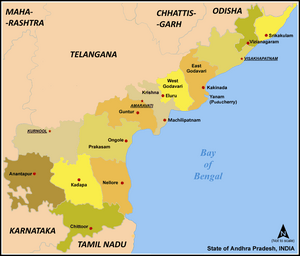 It is the largest district of Andhra Pradesh spanning an area of 19,130 square kilometres (7,390 sq mi), comparatively equivalent to Japan's Shikoku Island.

It is bounded on the north by Kurnool District, on the east by Kadapa District, on the southeast by Chittoor District, and on the southwest and west by Karnataka state. It is part of Rayalaseema region on the state. Its northern and central portions are a high plateau, generally undulating, with large granite rocks or low hill ranges rising occasionally above its surface. In the southern portion of the district the surface is more hilly, the plateau there rising to 2,000 ft (610 m). above the sea.

Anantapur city is 354 km from Hyderabad, 200 km from the neighbouring state capital of Bangalore. Anantapur connects Hyderabad and Bangalore through National Highway 7. There is an airport in the district located in Puttaparthi, known as Sri Sathya Sai Airport; however this airport currently has no scheduled service. Bangalore International Airport is nearest commercial airport to Anantapur District.

All content from Kiddle encyclopedia articles (including the article images and facts) can be freely used under Attribution-ShareAlike license, unless stated otherwise. Cite this article:
Anantapur district Facts for Kids. Kiddle Encyclopedia.