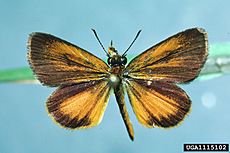 upper side of the wings 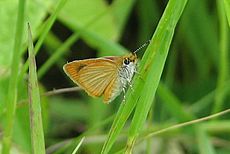 underside of the wings

The least skipper (Ancyloxypha numitor) is a butterfly in the family Hesperiidae. It is native to North America. They have a weak, bouncy flight.

The least skipper has rounded wings and a skinny body. Their antennae are checkered and have no hooks. Male least skipper do not have stigmata. The upper side of the top wing is dark brown, sometimes having orange on it. The bottom wing is orange with a dark brown border around it. The underside of the wings is bright orange. The bottom wing's veins are a whitish color. Its wingspan (length of the wings) is ¾ to 1 inch.

Males find females by looking for them in tall grasses. Females lay their eggs one at a time on the caterpillar's host plant (the plant that the caterpillar feeds on). The eggs are pale yellow. The caterpillar makes a nest of grass and silk. The caterpillar is green. It has four pairs of white wax glands on the abdomen near the underside. The head is brown or tan. It is usually darker in the center. The collar (the area between where the head and the body connect) has a white stripe and a black stripe. The chrysalis is a cream color and has brown markings. The caterpillar will hibernate in the winter. The least skipper has 2-4 broods each year.

Here is a list of host plants that the least skipper caterpillar feeds on:

All content from Kiddle encyclopedia articles (including the article images and facts) can be freely used under Attribution-ShareAlike license, unless stated otherwise. Cite this article:
Ancyloxypha numitor Facts for Kids. Kiddle Encyclopedia.