Andersons Creek is a creek in Warrandyte and Park Orchards, east of Melbourne, Victoria, Australia. It is a tributary of the Yarra River. For tens of thousands of years it was used as a food and tool source sustainably by the Wurundjeri people, Indigenous Australians of the Kulin nation, who spoke variations of the Woiwurrung language group.

The creek begins in the hills north of Ringwood on the boundary of urban metropolitan Melbourne where it flows for roughly 2–3 km through Park Orchards and around 4 km through Warrandyte before emptying into the Yarra River. The creek is relatively uninhibited by weirs, dams or reservoirs and it floods often after heavy rain. It provides habitat for significant species, which includes amongst others; platypus, rakali, koalas, powerful owls, rufous night herons, white-winged choughs and yellow-tailed black cockatoos.

Gold was first discovered in Victoria in Andersons Creek near the present day Warrandyte State Park and the township of Warrandyte was initially named after the creek. Gold can still be found in the creek; panning is permitted in a small section of the creek near the state park. 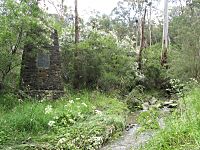 The cairn marking the site of the first recognised discovery of gold in Victoria, Australia in 1851 at Andersons Creek.

Tributaries and surrounding geographic features include, upstream to downstream:

All content from Kiddle encyclopedia articles (including the article images and facts) can be freely used under Attribution-ShareAlike license, unless stated otherwise. Cite this article:
Andersons Creek Facts for Kids. Kiddle Encyclopedia.