Warrandyte State Park is a state park, located in Warrandyte, east of Melbourne, Victoria on the banks of the Yarra River and surroundings. The park comprises 586 hectares of remnant bushland in various locations throughout Warrandyte and Wonga Park around Pound Bend, Fourth Hill, Black Flat, Yarra Brae and various other locations in the area. It hosts many significant geographical, environmental, archaeological and historical sites, such as the site of the first gold discovery in Victoria in 1851 and preserves the sites of former gold mines and tunnels. It is a popular destination for school and community groups and is frequented by local bush walkers and hikers.

Land now occupied by the park was initially occupied by Indigenous Australians of the Wurundjeri nation. After European settlement, gold was discovered in Warrandyte, and the area was mined for a number of years. Frequent clearing had at one stage removed all the vegetation in the area, and bushfires have erased much of the recent human architectural history of the area. However, they have ensured the health of the bushland and reduced the impact of human settlements, enabling the vegetation to recover throughout the 20th century. The major threats to the park's ecology are introduced species of flora and fauna such as foxes, rabbits, dogs and cats. Being located close to suburban settlements, backburning is regularly undertaken within the park to minimise risk of bushfires.

Land now occupied by the park was initially occupied by Indigenous Australians of the Wurundjeri nation. After European settlement in Melbourne, settlers were slow to spread out into the hills east of Melbourne into the Warrandyte area, but with the discovery of gold at Andersons Creek in July 1851, the first gold licences in Victoria were issued. At the turn of the century, the settlement at Warrandyte, employed about 250 miners. Much of the area was mined heavily throughout the late 19th and early 20th centuries, this was done in sections leaving large slots or "stopes" underground where the reef had been. Many of these mine shafts, structures and stopes remain as ruins throughout the park.

The park itself was established in 1975 in an effort to protect areas geographic, environmental, historical and archeological significance around Warrandyte. Stane Brae and Yarra Brae, were later added because of their conservation value. The most recent addition to the park was the Mount Lofty area in 1997. 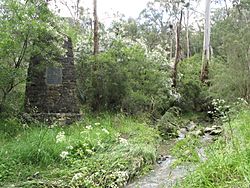 The cairn marking the site of the first recognised discovery of gold in Victoria in 1851 at Andersons Creek.

The park is located around 175 km upstream of the mouth of the Yarra River in Warrandyte, 24 km east of Melbourne. The park in its entirety comprises several detached areas of land adjoining the Yarra River from Pound Bend in the west, through Warrandyte to Wonga Park through the Warrandyte Gorge to Mount Lofty in the east. Other areas of land are situated throughout the hills immediately south of Warrandyte. The various areas include (roughly from west to east);

Other smaller areas and reserves within the state park include: 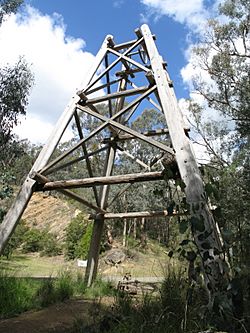 A headframe at Whipstick Gully near the Victory Mine.

The area around Fourth Hill and Whipstick Gully was the most intensively mined in the area, the Gold Heritage Walk is a trail that includes information boards and signage detailing the history of the goldfields in the area. Some of the ruins of former mines and structures include:

The wildlife, so diverse on the fringe of such a big city, includes kangaroos, wallabies, wombats, platypus and koalas. Over 100 bird species have been recorded as well as many reptiles, frogs, fish and insects. Vegetation in the area was almost totally cleared during the late 19th and early 20th centuries, most of the vegetation seen today has regrown since then. Smooth-barked Manna Gums and Silver Wattles line the Yarra River, while an assortment of Box Eucalypts and other Wattles cover the hills. Much of the hilly area is characterised by open, forested country, with an understorey of native grasses, creepers, orchids and other wildflowers. 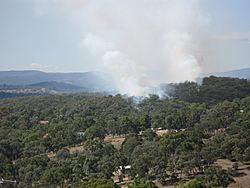 Controlled burning in the state park around Fourth Hill, 2008

All content from Kiddle encyclopedia articles (including the article images and facts) can be freely used under Attribution-ShareAlike license, unless stated otherwise. Cite this article:
Warrandyte State Park Facts for Kids. Kiddle Encyclopedia.