Andi Eleazu Peters (born 29 July 1970), is a British television presenter, producer, journalist and voice actor, currently employed by ITV and best known for roles on breakfast TV shows Live & Kicking, GMTV, Good Morning Britain and Lorraine, and for hosting Dancing on Ice: Extra and The Big Reunion. He competed in the first series of the ITV skating competition Dancing on Ice. 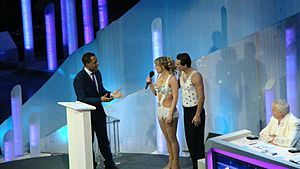 During his early television career, Andi Peters worked for ITV as an in-vision continuity announcer for Thames Television.

He was taken on by the BBC in 1989 as a presenter on Children's BBC for The Broom Cupboard, appearing alongside Phillip Schofield and Andy Crane. Peters was accompanied by Edd the Duck, a hand puppet with a green mohican. Peters hosted The Broom Cupboard for just over four years, leaving in 1993. He went on to present the BBC Children's television programme Live & Kicking with Emma Forbes and John Barrowman.

Subsequently, Peters went on to work at LWT and then for Channel 4 as commissioning editor for youth and children's programmes. Among his TV producer credits are The Noise (ITV), The O-Zone (BBC), Top of the Pops (BBC) and Shipwrecked (Channel 4).

Since 2013, Peters has been narrating the ITV2 reality series The Big Reunion, which shows the reunions of pop groups.

He appeared in the ITV daytime show Show Me the Telly a number of times towards the end of 2013. Since 28 April 2014, Peters has hosted competitions on the breakfast news programme Good Morning Britain, and also the ITV daytime game show Ejector Seat, which aired for a very short period in 2014 as a temporary replacement for Tipping Point.

He stars on Ant & Dec's Saturday Night Takeaway as a competition presenter.

Peters had a minor part in the 1999 animated film Toy Story 2, in which he provided the voice of Male Baggage Handler #1. Director John Lasseter offered the role to him while Peters was interviewing Lasseter for a Channel 4 "making-of" documentary. Because his US work visa did not cover voiceover work, Peters had to record his line in the UK over a live broadcast to the Pixar studio.

During his stint on Lorraine in August 2020, Peters revealed he was a Christian.  (change conflict)

All content from Kiddle encyclopedia articles (including the article images and facts) can be freely used under Attribution-ShareAlike license, unless stated otherwise. Cite this article:
Andi Peters Facts for Kids. Kiddle Encyclopedia.