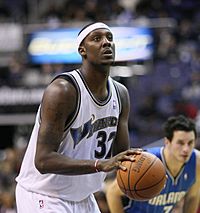 Andray Blatche (born August 22, 1986 in Syracuse, New York) is an Filipino-American basketball player that currently plays for the Washington Wizards of the NBA. On September 25, 2005, Blatche was shot in a carjacking in Alexandria, Virginia and recovered successfully. Blatche has played for the Washington Wizards for 5 seasons. Blatche became a naturalized Filipino in 2014. He plays for the Philippine national basketball team.

All content from Kiddle encyclopedia articles (including the article images and facts) can be freely used under Attribution-ShareAlike license, unless stated otherwise. Cite this article:
Andray Blatche Facts for Kids. Kiddle Encyclopedia.