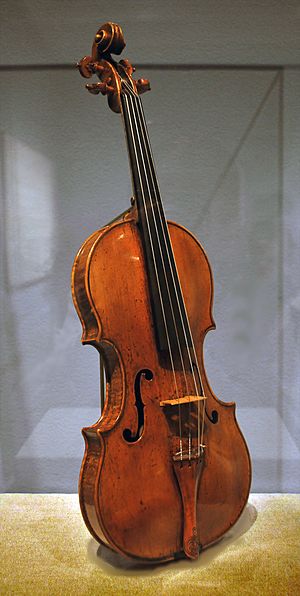 This violin, now at the Metropolitan Museum of Art, may have been part of a set made for the marriage of Philip II of Spain to Elisabeth of Valois in 1559, which would make it one of the earliest known violins in existence.

Andrea Amati was a luthier, from Cremona, Italy. Amati is credited with making the first instruments of the violin family that are in the form we use today. Several of his instruments survive to the present day, and some of them can still be played. Many of the surviving instruments were among a consignment of 38 instruments delivered to Charles IX of France in 1564.

It is estimated that Amati made some 38 instruments between 1560 and 1574 for the Queen Regent of France Catherine de Medici on behalf of her young son, Charles IX of France; one of these was a gilded bass violin, elaborately painted with royal symbols, called The King. There is some uncertainty about the exact date the instrument was crafted; The King's "label" gives the date as 1572, but some scholars have proposed an earlier date. Much of the collection was destroyed during the French Revolution but some pieces were recovered by Giovanni Battista Viotti's student M. J. B. Cartier. It then changed hands several times, first being acquired by the Duport brothers, Jean-Pierre and Jean-Louis. According to the instrument's documentation it was then purchased from Rembert Wurlitzer Co. in 1967 by Lawrence Witten. The King is currently part of the collection at the National Music Museum in Vermillion, South Dakota.

Role in the development of the modern violin

Based on iconographic and literary evidence, the violin can be dated back to 1520. There is no agreement among scholars regarding the development of the early violin. The rebec, fiddle and violoncello are attested to in Gaudenzio Ferrari's frescoes at the church of Saronno and Madonna of the Orange Tree at the church of Vercelli. However, According to Sotheby's:

"There is no surviving identifiable precedent for the exquisitely refined instruments that Amati made to the commission of Charles IX of France and Pope Pius V from about 1566 onward. Technically he may have added a fourth string to a louder, outdoor cousin of the viol that was intended to accompany dance music. Artistically he changed everything."

Sotheby's says "Amati's brilliance raised the status of the violin from a farmhand's entertainment to an embellishment fit for a royal court.

According to a biography by Roger Hargrave, Amati is one of the top candidates scholars have advanced for the inventor of the violin. The two other candidates he named were Fussen born in a region now part of present-day Germany. The other candidate he named was Gasparo' da Salo from Brescia.

Andrea Amati's two sons, Antonio Amati and Girolamo Amati, were also highly skilled violin makers, as was his grandson Nicolò Amati, who had over a dozen highly regarded apprentices, including Antonio Stradivari and Andrea Guarneri.

All content from Kiddle encyclopedia articles (including the article images and facts) can be freely used under Attribution-ShareAlike license, unless stated otherwise. Cite this article:
Andrea Amati Facts for Kids. Kiddle Encyclopedia.