Vermillion (Lakota: Waséoyuze; "The Place Where Vermilion is Obtained") is a city in and the county seat of Clay County, in the southeastern corner of the state of South Dakota, and the eleventh largest city in the state. According to the 2010 Census, the population was 10,571. The city lies atop a bluff near the Missouri River.

The area has been home to various Native American tribes for centuries. French fur traders first visited in the late 18th century. Vermillion was founded in 1859 and incorporated in 1873. The name refers to the Lakota name: wa sa wak pa'la (red stream). Home to the University of South Dakota, Vermillion has a mixed academic and rural character: The university is a major academic institution for the state, boasting the state's only law and medical schools, and the state's only AACSB accredited business school. Major farm products include corn, soybeans, and alfalfa.

Lewis and Clark camped at the mouth of the Vermillion River near the present-day town on August 24, 1804. The previous day, they had killed their first bison; and the following day, they climbed Spirit Mound, according to Clark's journal.

In May 1843, John James Audubon visited the Vermillion ravine to view the bird life. The town was considered for the location of South Dakota's first mental institution (now the Human Services Center) in 1873, although the hospital was eventually located in nearby Yankton.

The original town was entirely located below the bluffs on the banks of the Missouri River, and three-quarters of the town was washed away in the Great Flood of 1881.

Presidential candidates William Jennings Bryan visited and spoke in Vermillion on September 28, 1908, and William Howard Taft on the next day.

John Philip Sousa conducted the Sousa Band on October 26, 1926, at the facility that became known as Slagle Auditorium in 1929. 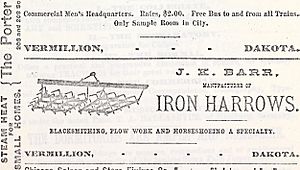 There were 3,811 households of which 22.5% had children under the age of 18 living with them, 32.8% were married couples living together, 8.4% had a female householder with no husband present, 3.2% had a male householder with no wife present, and 55.6% were non-families. 35.3% of all households were made up of individuals and 7.5% had someone living alone who was 65 years of age or older. The average household size was 2.21 and the average family size was 2.90.

There were 3,647 households out of which 25.8% had children under the age of 18 living with them, 37.5% were married couples living together, 9.2% had a female householder with no husband present, and 50.6% were non-families. 34.1% of all households were made up of individuals and 7.8% had someone living alone who was 65 years of age or older. The average household size was 2.24 and the average family size was 2.90.

For the population 25 years and over, 90.7% have a high school education or higher; 45.4% have a bachelor's degree or higher; and 21.2% have a graduate or professional degree.

Prentis Park includes two swimming pools: one kids pool, and one full size with a waterslide and diving boards. There is also a variety of playground equipment and wide open green space. Additionally the park features a snack bar (next to the pool area), several basketball hoops, and a disc golf course. It also contains a baseball diamond which is the home of the Vermillion Red Sox, of the South Dakota Amateur Baseball Association. Along with Prentis Park, the city maintains and owns Lion's Park, Barstow Park, and Cotton Park. The city also boasts a bike trail along the quiet Vermillion River. The Bluffs Golf Course is also owned and operated by the City of Vermillion. The Bluffs is an 18-hole championship golf course that overlooks the bluffs in Vermillion.

The University of South Dakota's National Music Museum (NMM) is accredited by the American Alliance of Museums in Washington, D.C., and is recognized as "A Landmark of American Music" by the National Music Council. It includes more than 15,000 American, European, and non-Western instruments.

Ratingen, Germany is the sister city of Vermillion.

All content from Kiddle encyclopedia articles (including the article images and facts) can be freely used under Attribution-ShareAlike license, unless stated otherwise. Cite this article:
Vermillion, South Dakota Facts for Kids. Kiddle Encyclopedia.