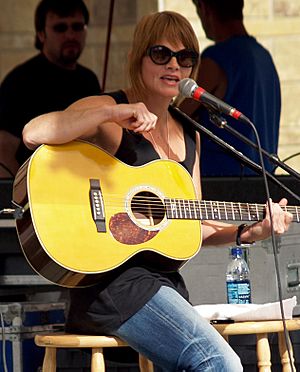 Shawn Colvin (born January 10, 1956 in Vermillion, South Dakota) is a singer-songwriter and a musician. She began her career in the 1980s, though it was not until 1997 that she became mainstream: her song "Sunny Came Home" (from her album A Few Small Repairs) was number one on the Billboard Adult Pop Songs chart in August 1997. Colvin released more records during the late 1990s, 2000s and 2010s.

All content from Kiddle encyclopedia articles (including the article images and facts) can be freely used under Attribution-ShareAlike license, unless stated otherwise. Cite this article:
Shawn Colvin Facts for Kids. Kiddle Encyclopedia.