Andreas Klöden (born 22 June 1975) is a German former professional road bicycle racer, who competed as a professional between 1998 and 2013. His major achievements include a bronze medal at the 2000 Olympic Games and finishing second in the general classification at the 2004 and 2006 Tour de France. Klöden is a tall, lightly built racer with enough strength to place high in the overall classifications of the Grand Tours, but his performances have been afflicted by injuries.

Klöden was born in Mittweida in 1975. Before he turned professional, he won the bronze medal in the Under 23 World Time Trial Championships in 1996, and two stages at the International Rheinland-Pfalz Rundfahrt in 1997.

Klöden signed with Team Telekom (later T-Mobile Team) in 1998, and in his first pro season he won the Niedersachsen-Rundfahrt's General classifications (GC) and the prologue of the Tour de Normandie. In 1999, he won a stage at the Portuguese Tour of Algarve. But the first of his great seasons came in 2000, where after notching two important victories in the GC of Paris–Nice and Tour of the Basque Country, he went on to obtain the bronze medal at the 2000 Sydney Olympics, after fellow German Jan Ullrich and Kazakh Alexander Vinokourov, two riders with whom he would spend several seasons on T-Mobile.

After that came three injury plagued seasons in which he gained no victories. He was forced to abandon the 2003 Tour de France due to a fractured tailbone. 2004 saw his cycling rebirth as he won the German National Road Racing Championships and so continued T-Mobile/Team Telekom's winning streak, which went back to Bernd Gröne's 1993 win of these Championships. Klöden held his great moment of form until the Tour de France, which began one week later. In that Tour, which he began as a domestique for Ullrich, he did not win any stage but finished second overall after taking second place from Italian Ivan Basso in the final time trial. Ullrich, whom Klöden was supposed to be supporting, finished fourth that year, the only time he finished outside the top three in the Tour de France. Finishing ahead of Ullrich brought Klöden international fame and rumours circulated that he was moving to Gerolsteiner or Illes Balears-Banesto, where he would have led the team, but instead he stayed at T-Mobile with Ullrich. 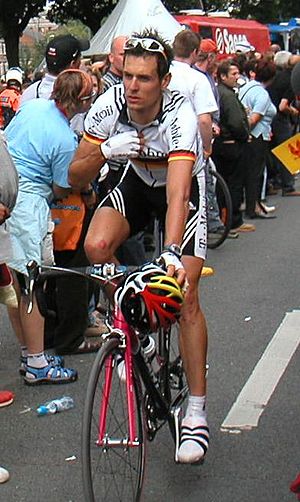 In the 2005 season he won a stage at the Bayern-Rundfahrt. Klöden as well as teammates Ullrich and Vinokourov were considered among the challengers for the 2005 Tour de France overall victory, with Ullrich as the strongest bid. Klöden contributed to the team success of T-Mobile in the race that saw Ullrich finish 3rd and Vinokourov finish fifth. On stage 8 in the Vosges Mountains, he attacked halfway up the final climb of the day and eventually took the K.O.M. points, catching breakaway leader Pieter Weening right at the summit. On the way down to the finish in Geradmer, he lost the sprint finish in the closest Tour de France finish of all time – (9.6 millimetres or 0.0002 secs) until stage 7 of the 2017 Tour de France when Marcel Kittel beat Edvald Boasson Hagen ( 4.0 millimetres or 0.00003 secs). Later, he withdrew from the Tour at stage 17 into Revel, having crashed during the 16th stage and fracturing a bone in his right wrist.

In the Tour of 2006, Klöden became one of the favorites for the overall victory when Ullrich, Vinokourov and Basso did not start. Vinokourov did not participate because of his teammates doping scandal, which caused his Astana team to fall below the minimum six riders to start. After somewhat weak performances in the first mountain stages, Klöden was in good shape in the Alps, climbing in the overall ranking. Klöden was very strong in the closing time trial where he finished second after his teammate Serhiy Honchar, climbing from fourth to the third place in the general classification over Carlos Sastre. On stage 11 to the Pla D'Beret, Klöden was dropped by the leading group and lost about 1:30mins, which cost him dearly. On Stage 15, he performed strongly, dropping everyone, except eventual overall winner Floyd Landis. On Stage 16, Kloden again performed well, finishing fourth on the stage, however on stage 17, he again cracked on the Col de Joux Plane, but recovered on the descent, thanks mainly to the help given to him by teammate Patrik Sinkewitz.

On 27 August 2006, Klöden announced that he would ride for Astana in the 2007 season, although Alexander Vinokourov was the team captain. This announcement came as something of a surprise to the cycling community because Klöden, despite his talent and accomplishments, would almost certainly not be the leader of that team, which was organized around Vinokourov. During the Tour de France, he rode well, but had to help Astana captain Vinokourov, and lost a few minutes. An accident almost saw the repeat of his 2003 Tour injury, but this time the injury to the coccyx was just a hairline fracture and he was able to continue. Astana formally withdrew from the 2007 Tour de France on 24 July, when Vinokourov's doping test was found to be positive.

His racing in September was interrupted by injury, following an accident while out training when a car crossed his path forcing him to swerve, Klöden ended up in a ditch. Although an X-ray showed no broken bones, he missed the GP de Plouay and the Tour of Poland.

His 2008 season was uneventful in grand tours though he won the Tour of Romandie that year and he came second in the Tour de Suisse. His 2009 Tour de France was mainly serving as a domestique for Alberto Contador and Lance Armstrong though after stage 15 Kloden sat 4th overall. Klodens podium chances closed in however on stage 17 when his teammate Alberto Contador put in a controversial attack dropping Kloden allowing the Andy and Frank Schleck to gain over 2 minutes over him. He would later end up finishing 6th overall that year though he would end up moving into 5th overall after Lance Armstrong's titles were stripped.

In 2009 allegations emerged claiming that Andreas Klöden used the Freiburg University Clinic for an illegal blood transfusion during the 2006 Tour de France. Later, Kloden and others apart of the T-Mobile Team, Matthias Kessler and Patrick Sinkewitz were confirmed by Freiberg doctors to have blood doped at the University during the 2006 Tour de France where their blood was held. At his retirement, Klöden denied that he ever used doping. He had made an agreement with prosecutors paid an undisclosed amount to a charity, to stop the investigation, because he felt that the investigation hindered his career.

Klöden had an uneventful 2010 season. He finished the 2010 Tour de France in 14th place 16’36” behind Contador. Contador was later disqualified, resulting in a 13th place 15'57' behind Andy Schleck. His other biggest finishes were 8th in Tour de Suisse and Eneco Tour.

2011 saw a rebirth of Klöden's career when he won the 2011 Tour of the Basque Country while also finished 2nd in Paris–Nice and getting a stage victory. He also had 2 ITT victories in Giro del Trentino and Critérium International. He carried his good form into the 2011 Tour de France but crashed and had to withdraw because of two crashes that injured his back. He later entered the Vuelta as co-leader with Brajkovic but withdrew.

In 2012, Klöden signed with RadioShack-NissanTrek. He finished the 2012 Tour de France in 11th place, 17'54" behind Wiggins. He also finished 4th in the USA Pro Cycling Challenge.

Klöden continued to ride for Radioshack in 2013. He finished 9th in both the 2013 Volta ao Algarve and 2013 Paris-Nice early on in the season. His first top five finish came in the 2013 Tour of Belgium, where he finished fourth. He lost time early on in the Pyrenees in the 2013 Tour de France, forcing him to switch his goals from the general classification to stage wins. He made the breakaway on stage 16 to Gap, finishing in fifth place. He tried his luck again on stage 19 to Le Grand-Bornand. After finishing second there in the 2004 Tour de France behind Lance Armstrong; he finished second again, this time after Rui Costa who had also won the stage to Gap. He finished the Tour in 30th place, 1h02'43" behind winner Chris Froome.

In October 2013, Klöden announced his retirement from cycling after a sixteen-year professional career.

All content from Kiddle encyclopedia articles (including the article images and facts) can be freely used under Attribution-ShareAlike license, unless stated otherwise. Cite this article:
Andreas Klöden Facts for Kids. Kiddle Encyclopedia.