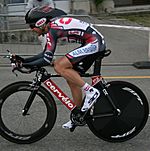 Carlos Sastre in a time trial

Carlos Sastre Candil (born 22 April 1975 in Leganés, Madrid) is a Spanish cyclist. He is retired and he won the Tour de France in 2008. He is a climbing specialist and has been very consistent, finishing consistently in the top 10 of the Vuelta and the Tour de France. A film made about his team showed that he is a man who loves his family. The title of the film is 'Overcoming'.

In 2009, his contract expired with CSC. He found work in two other teams before retiring at the end of 2011. Sastre is the only winner of the Tour de France from 2000 to 2010 who has not been involved in doping cases.

All content from Kiddle encyclopedia articles (including the article images and facts) can be freely used under Attribution-ShareAlike license, unless stated otherwise. Cite this article:
Carlos Sastre Facts for Kids. Kiddle Encyclopedia.