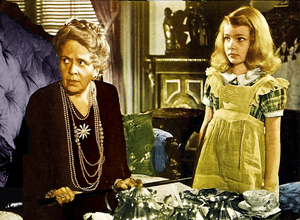 Anne Carter (right) with actress Julia Dean in The Curse of the Cat People (RKO, 1944).

Ann Carter (June 16, 1936 – January 27, 2014) was a former American child actress. She worked with dozens of movie stars. She played Amy Reed in The Curse of the Cat People. She played Peggy Allen in Child of Divorce.

Carter was born in Syracuse, New York. After acting, she graduated from Occidental College in Los Angeles. Carter taught school in California and in Seattle. She died in North Bend, Washington on January 27, 2014. She had been fighting ovarian cancer for nine years.

All content from Kiddle encyclopedia articles (including the article images and facts) can be freely used under Attribution-ShareAlike license, unless stated otherwise. Cite this article:
Ann Carter Facts for Kids. Kiddle Encyclopedia.