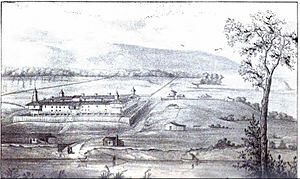 The Campus Martius at Marietta 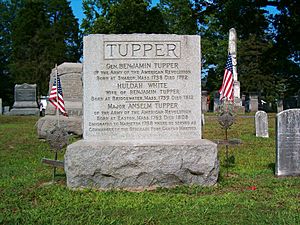 Marker at Mound Cemetery for Anselm Tupper and his parents, Benjamin and Huldah Tupper

Anselm Tupper (1763–1808) was an officer of the Continental Army during the American Revolutionary War, a pioneer to the Ohio Country, and one of the founders of Marietta, Ohio, the first permanent American settlement in the Northwest Territory. The eldest son of Benjamin Tupper, Anselm enlisted in the fight for independence during 1775, while only eleven years old, achieving the rank of lieutenant before his seventeenth birthday. After the war, he was a pioneer and surveyor in the Northwest Territory, and became major of the militia at Marietta during the Northwest Indian War. Tupper was the first school teacher at Marietta, and was a classical scholar and poet. He was unmarried, and was known as a favorite in society.

Anselm Tupper was born in Easton, Massachusetts on October 11, 1763, and grew up to the age of eleven in Chesterfield in western Massachusetts. His childhood was brief, as he enlisted in May 1775 at the young age of eleven, shortly after the Battles of Lexington and Concord, likely being one of the younger soldiers in the fight for independence. Anselm joined Captain Robert West's Chesterfield company, assigned to Colonel John Fellows' regiment (17th Massachusetts Bay Provincial Regiment), in which Anselm's father, Benjamin Tupper, was already major. As described in Chaffin's History of the Town of Easton, Massachusetts,

It is interesting to think of this Revolutionary soldier, not yet twelve years old, engaging in all the toil, hardship, and peril of war, and never flinching until his country's independence was achieved.

Post-war and the Ohio Country

In 1786, Rufus Putnam and Benjamin Tupper founded the Ohio Company of Associates. During that year, Anselm joined his father in a survey of the Seven Ranges in the Ohio Country. Anslem became a shareholder of the Ohio Company of Associates, and was engaged as a surveyor with the company. Subsequently, on April 7, 1788, Anselm Tupper and a group of American pioneers to the Northwest Territory, led by Rufus Putnam, arrived at the confluence of the Ohio and Muskingum rivers to establish Marietta, Ohio as the first permanent American settlement in the Northwest Territory. Anselm's parents, Benjamin and Huldah, arrived several months later.

Anselm Tupper was a notable member of the pioneer settlement of Marietta, and a favorite in society. In September 1788, he served as a juror on the Grand Jury of the first civil court in the Northwest Territory. During the Northwest Indian War in 1789, he was appointed major in the militia with command of the Campus Martius fortification during the war. He was a founding member of the Society of the Cincinnati, and an original member of the American Union Lodge No. 1 of Freemasons at Marietta along with others including Rufus Putnam, Benjamin Tupper, and William Stacy. Anselm Tupper was the second officer of the vessel Orlando, built at Marietta in 1803; he sailed with the Orlando from Marietta down the Ohio and Mississippi rivers, across the Atlantic, and through the Mediterranean and Adriatic seas to Trieste. He then returned home to Marietta. He was the first school teacher in Marietta and the Northwest Territory, was a classical scholar, and was also a poet.

Anselm Tupper died on December 25, 1808. He is buried with his father and many other American Revolutionary War soldiers and pioneers at Mound Cemetery in Marietta.

All content from Kiddle encyclopedia articles (including the article images and facts) can be freely used under Attribution-ShareAlike license, unless stated otherwise. Cite this article:
Anselm Tupper Facts for Kids. Kiddle Encyclopedia.