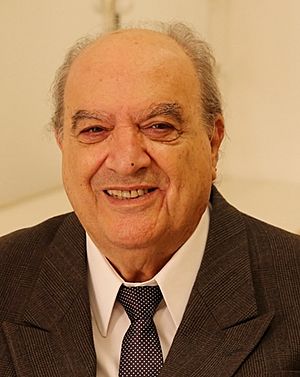 Abujamra was born in 1932 in Ourinhos, São Paulo. He was of Lebanese ancestry. He majored in journalism and philosophy at the Pontifícia Universidade Católica do Rio Grande do Sul in 1957. His son is musician André Abujamra (born 1965).

All content from Kiddle encyclopedia articles (including the article images and facts) can be freely used under Attribution-ShareAlike license, unless stated otherwise. Cite this article:
Antônio Abujamra Facts for Kids. Kiddle Encyclopedia.