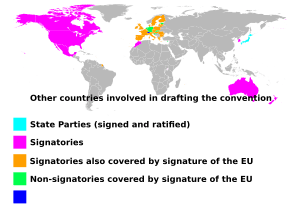 The Anti-Counterfeiting Trade Agreement (or ACTA) is an international treaty that wants to make it easier to fight product piracy to protect intellectual property. This includes fighting counterfeits and copyright infringement, and imposing stricter regulations on generic drugs. ACTA is based on an earlier agreement called TRIPS.

Japan is the only country that has ratified this. European Union also has signed it but many people in Europe is against the Agreement because it can violate human rights especially the freedom of expression and privacy.

All content from Kiddle encyclopedia articles (including the article images and facts) can be freely used under Attribution-ShareAlike license, unless stated otherwise. Cite this article:
Anti-Counterfeiting Trade Agreement Facts for Kids. Kiddle Encyclopedia.