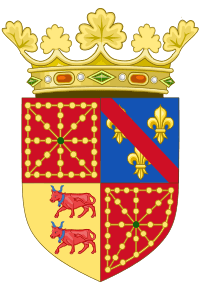 Coat of Arms of Antoine de Bourbon and the Kings of Navarre.

Antoine de Bourbon, duc de Vendôme, also called Antoine of Navarre (22 April 1518 – 17 November 1562) was the King of Navarre through his marriage (jure uxoris) to Queen Jeanne III, from 1555 until his death. He was the founder of the Royal House of Bourbon. Antoine was the father of Henry IV of France.

All content from Kiddle encyclopedia articles (including the article images and facts) can be freely used under Attribution-ShareAlike license, unless stated otherwise. Cite this article:
Antoine de Bourbon Facts for Kids. Kiddle Encyclopedia.