Antonio Maria Giovinazzi ,( born 14 December 1993) nicknamed "The Italian Jesus", referencing his resemblance to the Biblical character, is an Italian racing driver currently competing in Formula One for Alfa Romeo Racing. He was the 2015 FIA Formula 3 European Championship runner-up and raced with Prema in the 2016 GP2 Series, again finishing runner-up with five wins and eight overall podiums. Giovinazzi was chosen by Scuderia Ferrari to be their third and reserve driver for the 2017 season. He made his competitive debut for Sauber at the 2017 Australian Grand Prix, replacing the injured Pascal Wehrlein. He also replaced Wehrlein at the following Chinese Grand Prix as Wehrlein continued his recovery. Giovinazzi signed a contract to race full-time for Alfa Romeo Racing in 2019.

Giovinazzi began karting in 2000. In 2006, he became the champion in the Italian National Trophy 60cc and Euro Trophy 60 championships. He was champion of the WSK Master Series in the KF2 class in both 2010 and 2011.

Giovinazzi began his single seater career by competing in Formula Pilota China in 2012. He finished as the overall champion in his debut season with a total of six wins. He also raced for the BVM team in the last round of the 2012 Formula Abarth season at Monza. Despite winning two races and finishing in second place in one, he did not receive any points since he was a guest driver.

Giovinazzi competed in the 2013 British Formula Three Championship season with the Double R Racing team, alongside Sean Gelael and Tatiana Calderón. He won two races, at Silverstone and at Spa-Francorchamps, and ended the season as runner-up behind Jordan King. During the season, Giovinazzi entered the 2013 Masters of Formula 3, finishing the race in 10th place.

In 2013, Giovinazzi made his debut in the FIA Formula 3 European Championship with the Double R Racing team. He scored his first points at the fourth round in Brands Hatch, finishing 11th in the first race. His best result of the season was at the final race in Hockenheim, where he finished 6th. Giovinazzi ended the season in 15th place in the championship with 45 points.

In 2014, Giovinazzi signed with Jagonya Agam with Carlin to compete in the 2014 FIA Formula 3 European Championship season. His first Formula 3 podium came with a 2nd-place finish in Hockenheim. His first win came from pole position at the Red Bull Ring, before adding another win at the following round at the Nürburgring. He ended the season in 6th place in the standings with 238 points, recording two wins, seven podium finishes, two pole positions and three fastest laps.

Giovinazzi continued in the championship with Jagonya Agam with Carlin in 2015, in a field which included future Formula One competitors Charles Leclerc, Lance Stroll, George Russell and Alexander Albon. He was a championship contender for much of the season, eventually losing out to Felix Rosenqvist. Giovinazzi ended the season as the championship runner-up, with 412.5 points. He recorded six wins, twenty podium finishes, four pole positions and four fastest laps. During the 2015 season he made his second appearance at the Masters of Formula 3 race, winning the race after starting from 2nd on the grid.

After the end of his European Formula 3 season, Giovinazzi entered the non-championship 2015 Macau Grand Prix with Carlin, qualifying in 4th place. In the qualifying race, he caused a multi-car pile up on the first lap after colliding with Daniel Juncadella. Giovinazzi went on to win the qualifying race, but was later handed a 20-second penalty for the incident, demoting him to 10th. At the main event, he recovered to finish in 4th place.

Giovinazzi had impressed Audi Sport Team Phoenix during a DTM test in 2015, before being called up to replace the suspended Timo Scheider for the round at Moscow Raceway during the 2015 DTM season. He finished the races in 19th and 21st.

He took part at the 2018 24 Hours of Le Mans driving a Ferrari 488 GTE for AF Corse Ferrari factory team alongside Toni Vilander and Pipo Derani. He finished the race 5th in GTE category. 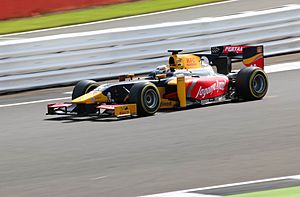 Giovinazzi driving at Silverstone during the 2016 GP2 Season

After a poor start by finishing outside the points and losing reverse grid pole in the first two rounds, Giovinazzi scored victories in both the feature and sprint races in Baku, becoming the first driver to do 'the double' since Davide Valsecchi in 2012.

Giovinazzi took pole position from his teammate Gasly at Spa, and won the Sprint Race after Gasly had won the feature race on Saturday. At Monza, he took pole position, but was disqualified from the session due to a technical infringement. Despite starting from the back of the grid, he won in the Feature Race after a mix up involving the safety car that worked in his favour.

Giovinazzi took the lead of the championship at Sepang by overtaking Sergey Sirotkin late on for his 5th win of the season. However, Pierre Gasly's victory in the Abu Dhabi feature race meant that Gasly led by 12 points into the final race. Giovinazzi finished the final race ahead of Gasly as Alex Lynn won the race, however, after making a poor start, he was unable to overturn the 12-point gap, and Gasly won the championship by 8 points.

Had Giovinazzi won the championship, he would have been the first rookie champion since Nico Hülkenberg in 2009. He would also have been the last GP2 champion as the series would become FIA Formula 2 Championship for 2017.

On 5 September 2016, it was announced that Giovinazzi would perform simulator work for Scuderia Ferrari. In December, he was confirmed as Ferrari's third driver. 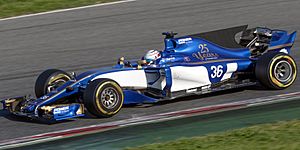 Giovinazzi testing for Sauber in 2017 at Circuit de Barcelona-Catalunya

Giovinazzi participated in pre-season testing for the 2017 season with Sauber. In a similar fashion to his DTM debut two years prior, he substituted for the injured Pascal Wehrlein at the Australian Grand Prix. Wehrlein did not feel fit enough for a complete race distance due to his training deficit as a result of a crash at the 2017 Race of Champions. Giovinazzi finished 12th on his debut. His debut meant he was the first Italian driver to start a Formula One race since Jarno Trulli and Vitantonio Liuzzi at the 2011 Brazilian Grand Prix. Sauber announced that Giovinazzi would again replace Wehrlein for the Chinese Grand Prix, where he crashed out during both qualifying and the race. 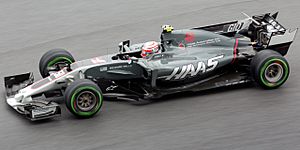 Giovinazzi testing for Haas during the 2017 Malaysian Grand Prix. 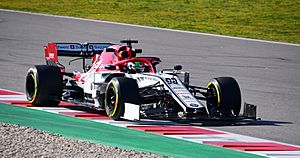 Giovinazzi testing the Alfa Romeo Racing C38 at Barcelona in 2019 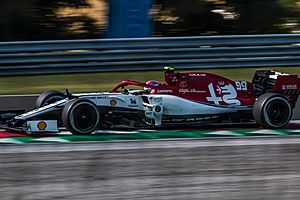 Giovinazzi at the 2019 Hungarian Grand Prix.

Giovinazzi went eight races without scoring points until he scored his first at the Austrian Grand Prix, finishing 10th. It was the first points finish for an Italian driver in Formula One since Vitantonio Liuzzi finished sixth at the 2010 Korean Grand Prix. The next race in Britain saw his first retirement of the season, after a mechanical problem caused him to spin out into a gravel trap. He crashed out on the last lap of the Belgian Grand Prix, having been running in ninth place. It later emerged that the crash caused Alfa Romeo to consider Giovinazzi's future with the team, with team principal Frédéric Vasseur saying "We had a tough discussion with Antonio, because these kind of things can decide your career. We were thinking about the future." At this stage of the season, Giovinazzi had collected one point, whilst teammate Räikkönen had scored 31.

The second half of the season was more successful for Giovinazzi. He claimed points a week after the Belgian Grand Prix with a ninth place finish at his first home race in Formula One. On lap 27 of the Singapore Grand Prix, Giovinazzi led the race for four laps after the leaders had pitted. It was the first time he had led a Formula One Grand Prix race in his career. For Alfa Romeo, it was the first time since Andrea de Cesaris led in the 1983 Belgian Grand Prix. Giovinazzi ultimately finished 10th, scoring points for the second consecutive race. At the Brazilian Grand Prix, he achieved his career best finish, crossing the line in sixth place before being promoted to fifth after Lewis Hamilton was penalised. Giovinazzi ended the season in 17th place in the championship with 14 points. 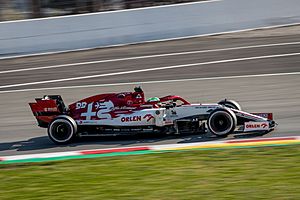 Giovinazzi in 2020, during pre-season testing

Giovinazzi and Räikkönen were retained by Alfa Romeo for the 2020 season.

Giovinazzi scored points at the first race of the season in Austria, qualifying 18th but finishing ninth after nine other cars retired from the race. On lap 11 of the Belgian Grand Prix, Giovinazzi lost control and crashed at turn 14. A stray wheel from his car hit the Williams of George Russell causing both to retire from the race. He was involved in a high-speed accident at the Tuscan Grand Prix during the safety car restart, in which four cars were eliminated from the race. Two point-scoring finishes came at the Eifel Grand Prix, where he held off the Ferrari of Sebastian Vettel to finish tenth, and at the Emilia Romagna Grand Prix, where he scored another tenth-placed finish after starting from last on the grid. At the Turkish Grand Prix, Giovinazzi reached the third qualifying session (Q3) for the first time since the 2019 Austrian Grand Prix, qualifying 10th. He went on to retire from the race with gearbox problems.

Giovinazzi ended the season in 17th place in the drivers' championship. He scored four points, the same number as teammate Räikkönen, however Räikkönen placed above Giovinazzi by virtue of having more ninth-placed finishes. Giovinazzi outqualified Räikkönen at nine of the season's 17 races. 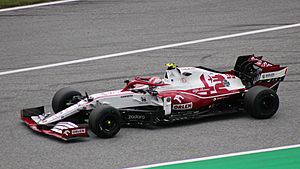 Giovinazzi at the 2021 Austrian Grand Prix

Giovinazzi and Räikkönen were retained by Alfa Romeo for the 2021 season. Giovinazzi qualified 10th for the Monaco Grand Prix, his first Q3 appearance of the year. He finished the race in 10th place, scoring Alfa Romeo's first point of the season.

All content from Kiddle encyclopedia articles (including the article images and facts) can be freely used under Attribution-ShareAlike license, unless stated otherwise. Cite this article:
Antonio Giovinazzi Facts for Kids. Kiddle Encyclopedia.