The Apache trout, Oncorhynchus apache, is a species of freshwater fish in the salmon family (family Salmonidae) of order Salmoniformes. It is one of the Pacific trouts.

The Apache trout measures in length from 6 to 24 in (15–61 cm), and weighs between 0.4 to 6 lb (0.2–2.7 kg). It rarely exceeds 10 in (25 cm), but can reach up to 16 in (40 cm) in its native, headwater streams. Apache trout are a yellowish-gold color with a golden belly and have medium-sized dark spots that are evenly spaced and that may extend below the lateral line and onto the dorsal and tail fins. The top of its head and back are dark olive in color, and it has the appearance of having a black stripe/mask through each of its eyes, due to two small black dots on either side of the pupil. There can be a throat mark below the lower jaw, ranging in color from yellow to gold.

The Apache trout is the state fish of Arizona, and is one of only two species of trout native to that state, with the other being the gila trout (O. g. gilae). It natively lives in clear, cool streams in the White Mountains that flow through coniferous forests and marshes, but has been introduced into several lakes in the area. The Apache trout is native to the upper Salt River watershed (Black and White rivers) and the upper Little Colorado River watershed. Apache trout have been introduced into isolated streams outside of their historic range in the Pinaleno Mountains and the North Rim of the Grand Canyon. 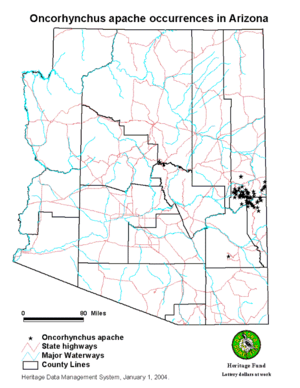 Recovery and management efforts for Apache trout have been ongoing since the 1940s. Apache trout are raised in federal and state hatcheries, and reared fish have been used to assist with recovery and to maintain populations for sport fishing in certain streams and reservoirs.

Today, the main risk to the Apache trout is its easy hybridization with the rainbow trout and major forest fires. Cutthroat trout are also genetically similar and cross-breed with Apache trout, compromising the genetic purity of each species. The range of the Apache trout remains limited, which puts it at risk, but it is now common enough that limited fishing is permitted.

All content from Kiddle encyclopedia articles (including the article images and facts) can be freely used under Attribution-ShareAlike license, unless stated otherwise. Cite this article:
Apache trout Facts for Kids. Kiddle Encyclopedia.