The Arctiinae (formerly called the family Arctiidae) are a large and diverse subfamily of moths, with around 11,000 species found all over the world, including 6,000 neotropical species. This group includes the groups commonly known as tiger moths (or tigers), which usually have bright colours, footmen, which are usually much drabber, lichen moths, and wasp moths. Many species have "hairy" caterpillars that are popularly known as woolly bears or woolly worms. The scientific name of this subfamily refers to this hairiness (Gk. αρκτος = a bear). Some species within the Arctiinae have the word tussock in their common name due to people misidentifying them as members of the Lymantriinae based on the characteristics of the larvae.

The subfamily was previously classified as the family Arctiidae of the superfamily Noctuoidea and is a monophyletic group. Recent phylogenetic studies have shown that the group is most closely related to litter moths Herminiinae and the Old World Aganainae, which are subfamilies of the family Erebidae. The Arctiidae as a whole have been reclassified to represent this relationship. The family was lowered to subfamily status as the Arctiinae within the Erebidae. The subfamilies and tribes of Arctiidae were lowered to tribes and subtribes, respectively, of this new Arctiinae to preserve the internal structure of the group.

Many genera are classified into the following tribes, while others remain unclassified (Incertae sedis). 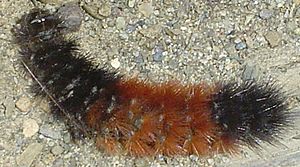 Many species retain distasteful or poisonous chemicals acquired from their host plants. Some species also have the ability to make their own defenses. Common defenses include: cardiac glycosides (or cardenolides), pyrrolizidine alkaloids, pyrazines and histamines. Larvae usually acquire these chemicals, and may retain them in the adult stage. But adults can acquire them, too, by regurgitating decomposing plants containing the compounds and sucking up the fluid. Adults can transfer the defenses to their eggs, and males sometimes transfer them to females to help with defense of the eggs. Larval "hairs" may be stinging in some species, due to histamines their caterpillar makes.

The insects advertise these defenses with aposematic bright coloration, unusual postures, odours, or, in adults, ultrasonic vibrations. Some mimic moths that are poisonous or wasps that sting. The ultrasound signals help nocturnal predators to learn to avoid the moths, and for some species can jam bat echolocation.

Many of the caterpillars and adults are active during the daytime; however, most species of this taxa are night-flying. Moths are attracted by light, but there is one species, Borearctia menetriesii, that never comes to the light. Basking to accelerate digestion is common in the larval stages, and social behaviour may range from solitary to gregarious. Like most Lepidoptera, larvae produce a small silk pad before each moult, in which their prolegs are engaged.

If disturbed, woolly bear caterpillars will roll into a tight spiral or drop from their perch suspended by a strand of silk. Isabella tiger moths (Pyrrharctia isabella) overwinter in the caterpillar stage. They can survive freezing at moderate subzero temperatures by producing a cryoprotectant chemical. The larvae of another species, Phragmatobia fuliginosa, may be found on snow seeking a place to pupate. Species in Arctic and temperate belts overwinter in larval stage.

Some tiger moths produce ultrasonic clicks in response to the echolocation of bats to protect themselves.

Many species are polyphagous in larva stage. Monophagous species, like the cinnabar moth (Tyria jacobaeae) are scarce.

Although abundant, few species in this subfamily are of economic importance. Even the fall webworm, an abundant and highly polyphagous tree-feeding species that has spread from North America to Asia and Europe, does not do lasting damage to healthy hosts. 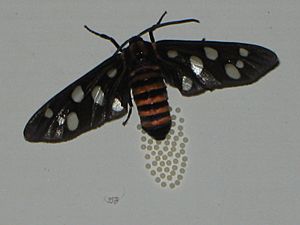 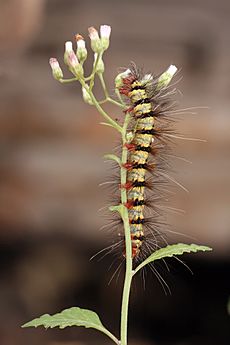 Local folklore of the American Northeast and the American South hold that "woolly bears" (or "woolly worms" in the South) help humans predict the weather, similar to the groundhog. The forthcoming severity of a winter may be indicated by the amount of black on the Isabella tiger moth's caterpillar—the most familiar woolly bear in North America. More brown than black is said to mean a mild winter, while more black than brown is supposed to mean a harsh winter. However, the relative width of the black band varies among instars, not according to weather. The mythical qualities attributed to woolly bears in America have led to such things as the Woollybear Festival in Ohio, the Woolly Worm Festival in Beattyville, Kentucky and the Woolly Worm Festival in Banner Elk, North Carolina.

All content from Kiddle encyclopedia articles (including the article images and facts) can be freely used under Attribution-ShareAlike license, unless stated otherwise. Cite this article:
Arctiinae Facts for Kids. Kiddle Encyclopedia.