The Arena da Baixada is a football stadium and an indoor arena in Água Verde neighborhood, Curitiba, Paraná, Brazil. It has a maximum seating capacity of 28,327 people. It is formerly known as Estádio Joaquim Américo Guimarães. It was named Kyocera Arena for a short period of time (beginning 2005 until April 1, 2008). The stadium opened on June 6, 1914. The stadium is owned by Clube Atlético Paranaense. Its formal name honors Joaquim Américo Guimarães, a former chairman of Internacional-PR, which was a football club that merged with América-PR. This merger formed Atlético Paranaense. Joaquim Américo Guimarães started the stadium's construction in 1912. Despite being called an arena, it is technically an outdoor stadium. On May 31 2009, the stadium was made one of the match sites for the Brazil 2014 World Cup. 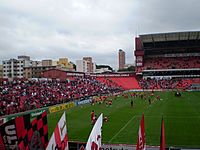 Match against São Paulo in the 2009 Série A

The inaugural match of the old stadium was played on September 6, 1914, when Flamengo beat Internacional 7–1. The first goal of the stadium was scored by Flamengo's Arnaldo.

The inaugural match of the new building was played on June 24, 1999, when Atlético Paranaense beat Cerro Porteño of Paraguay 2–1. The first goal of the stadium after its reinauguration was scored by Atlético's Lucas.

The stadium's attendance record currently stands at 31,740. It was set on December 16, 2001 when Atlético Paranaense beat São Caetano 4–2, on the first game of that year's Brazilian Championship finals.

Though the present stadium is still new, there are some plans for newer stadiums for the 2014 FIFA World Cup.

The contract with Kyocera that gave the company naming rights expired in early 2008. It was not renewed, and no new partnership was announced. The stadium went back to its old name, Arena da Baixada.

All content from Kiddle encyclopedia articles (including the article images and facts) can be freely used under Attribution-ShareAlike license, unless stated otherwise. Cite this article:
Arena da Baixada Facts for Kids. Kiddle Encyclopedia.