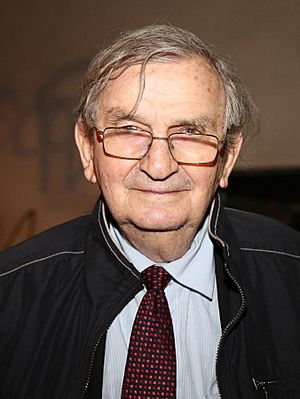 Ari Rath (Hebrew: ארי רט‎; 6 January 1925 – 13 January 2017) was an Austrian-Israeli journalist and writer. He was born and grew up in Vienna. After the Anschluss, Rath, who was Jewish, came through a Kindertransport as a thirteen-year-old boy to Palestine. In 1975, he became an editor for The Jerusalem Post. Later, in 1979, he became the chief editor. In 1989, he left The Jerusalem Post, and taught at the University of Potsdam. He supported a peaceful bringing together of Israel and Palestine.

All content from Kiddle encyclopedia articles (including the article images and facts) can be freely used under Attribution-ShareAlike license, unless stated otherwise. Cite this article:
Ari Rath Facts for Kids. Kiddle Encyclopedia.