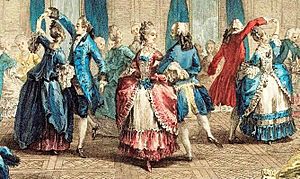 An aristocrat is a person of a the highest social class of a society. In many places, aristocrats have hereditary titles. In some societies such as Ancient Greece, Rome, and India, aristocratic status may come from membership in a military caste. It has also been very common for aristocrats to belong to priestly dynasties.

Aristocratic status can involve feudal or legal privileges. They are usually below only the monarch of a country or nation in its social hierarchy. In modern era European societies, the term aristocracy has often been used synonymously with the nobility. This was a specific class that arose in the middle ages. The term aristocracy derives from the Greek ἀριστοκρατία (aristokratia ἄριστος (aristos) "excellent," and κράτος (kratos) "power".

All content from Kiddle encyclopedia articles (including the article images and facts) can be freely used under Attribution-ShareAlike license, unless stated otherwise. Cite this article:
Aristocrat Facts for Kids. Kiddle Encyclopedia.