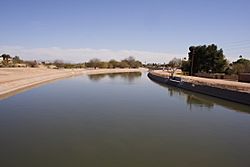 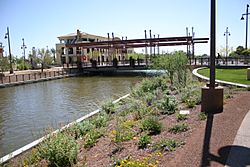 Marshall Way bridge over the Arizona Canal in Downtown Scottsdale. 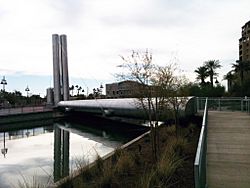 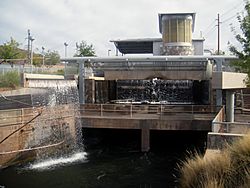 The Arizona Canal is a major canal in central Maricopa County that led to the founding of several communities, now among the wealthier neighborhoods of suburban Phoenix, constructed in the late 1880s. Flood irrigation of residential yards is still common in these neighborhoods, using a system of lateral waterways connected via gates to the canal itself. Like most Valley canals, its banks are popular with joggers and bicyclists.

William John Murphy was hired in 1883 to spearhead its construction, which was completed in May 1885. He then founded Glendale; its downtown Murphy Park is named for him. Nearby Peoria was also founded within the decade.

Several miles upstream (east), 640 acres (2.6 km2) on the canal's south side were purchased in 1888 by a former Civil War chaplain named Major Winfield Scott, establishing what is now Scottsdale. Murphy later built the Ingleside Club hotel near Scottsdale (in what is now Arcadia), laying the foundation for the area's vital tourism economy. Several resorts - The Phoenician, Biltmore, Royal Palms, a Pointe Hilton and a Ritz-Carlton - were all built close to the canal between 1929 and 1988. Also, five shopping malls of varying size and affluence - Borgata, Scottsdale Fashion Square, Biltmore Fashion Park, Metrocenter Mall and Arrowhead Towne Center - now reside along the canal's route. Five miles were added to the canal's western end in 1894, completing its 47-mile (76 km) length.

All content from Kiddle encyclopedia articles (including the article images and facts) can be freely used under Attribution-ShareAlike license, unless stated otherwise. Cite this article:
Arizona Canal Facts for Kids. Kiddle Encyclopedia.