The Arizona Sports and Tourism Authority (AZSTA) is a corporate and political body having the rights, powers and immunities of a municipal corporation. It was created on April 24, 2000, by Arizona Senate Bill 1220. The mission of the AZSTA is to build and operate a multipurpose facility, to provide funding for tourism promotion in Maricopa County, to improve Cactus League spring training facilities, and to build community youth and amateur sports and recreational facilities.

The AZSTA Board of Directors consists of nine citizens of Maricopa Co. who volunteer their time and accept no compensation or per diem. The Board members are appointed to five-year terms by the Governor (5), the President of the Senate (2) and the Speaker of the House (2) and are eligible to serve two terms. Board appointees are appointed to achieve a balanced representation of the Valley's regions as well as the tourism industry, Cactus League and youth sports. The daily operation of the AZSTA is overseen by the Executive Staff Members. 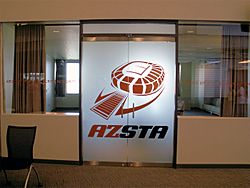 The first order of business for the TSA was to bring a stadium financing package to voters in Maricopa County which took the form of Arizona Proposition 302. On November 7, 2000, voters approved the ballot initiative with a 52% to 48% vote.

For more information and history on the AZSTA's involvement with Cardinals Stadium (its original title), see State Farm Stadium.

In February 2002, AZSTA made its first spring training decision when it voted to increase the funding commitment for the Cmcity of Surprise spring training facility. In December 2002, the city of Surprise held the grand opening of "Billy Parker Field". In February 2003, AZSTA sold $33 million of Cactus League bonds and directed $4.3 million to a $6.4 million upgrade project for Phoenix Municipal Stadium. The $4.3 million was presented in a commemorative check on March 26, 2003, during an Oakland Athletics vs. Arizona Diamondbacks game. The Phoenix Municipal Stadium project was completed in February 2004.

Upcoming Cactus League projects include a stadium in Goodyear for the Cleveland Indians and a stadium in Glendale for the Los Angeles Dodgers and the Chicago White Sox.

All content from Kiddle encyclopedia articles (including the article images and facts) can be freely used under Attribution-ShareAlike license, unless stated otherwise. Cite this article:
Arizona Sports and Tourism Authority Facts for Kids. Kiddle Encyclopedia.