The Armco-Ferro House, in Beverly Shores, Indiana, was originally constructed for the 1933 Century of Progress Exposition in Chicago. "The ... Exposition opened in May of 1933 directed by the theme of science and its role in industrial advancement. Within the Home and Industrial Arts Group were model houses, which featured modern materials, building methods and innovative home appliances, including the Armco-Ferro-Mayflower, Wieboldt-Rostone and Florida Tropical houses, and the House of Tomorrow. All utilized new techniques of design, construction and prefabrication in an attempt to bring the out-of-date housing industry in line with more efficient manufacturing practices such as those used by the auto industry." The Home and Industrial Arts Group was the most successful venue of the Exposition. The Armco-Ferro House was designed by Robert Smith, Jr., of Cleveland, Ohio. It is the only remaining example from the exposition that met the Fair Committee's design criteria; a house that could be mass-produced and was affordable for an American family of modest means. .

From research completed by the Historic American Buildings Survey (HABS): The Ferro Enamel Corporation, one of the two major sponsors for the ... house, was formed in 1930 by a merger between the Ferro Enameling Company and the Ferro Enamel and Supply Co. The idea of using porcelain enamel for residential construction was introduced by Bob Weaver, president of the newly formed company. Shortly after the merger, Charles Bacon Rowley, architect, designed a four-person house with Ferro-Enamel shingles that the company erected in Cleveland, Ohio, in July 1932.31 Despite the innovative use of ferroenamel as a cladding material, the house was built using conventional wood construction. The first porcelain-enameled frameless steel house was completed ... in South Euclid, Ohio ... Like the Armco-Ferro house, this house was designed by Robert Smith, Jr., and was built by Insulated Steel Corporation; ...

In 1932, the American Rolling Mill Company (Armco) ... built a second porcelainenameled frameless steel house ... using Robert Smith, Jr. as architect. The Ferro Enamel Corporation and the Insulated Steel Construction Company collaborated with Armco, thus setting the stage for the partnership that made the Century of Progress home possible. 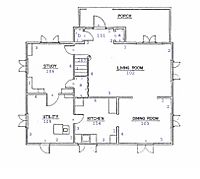 The open lawn around the house has grown in over the years since it was placed on the rise overlooking Lake Michigan. The landscape does not match that of the community at the World's Fair site.

This seemingly frameless house boasts a revolutionary construction system: corrugated steel panels that are bolted together. This system resembles a typical cardboard box. The corrugated panels are clad with porcelain-enameled steel panels produced by the Ferro Enamel Corporation. This construction system later provided the inspiration for the post World War II prefabricated housing developed by the Lustron Corporation. . 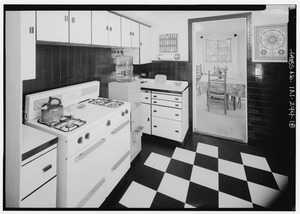 Kitchen, South Rear Center Room, looking in the Dining Room from the west

The house is a contributing property to the Century of Progress Architectural District.

Restoration efforts on the Armco-Ferro House were started in 1997, with the Indiana Dunes National Lakeshore and the Historic Landmarks Foundation of Indiana searching for potential leasees to restore the building.

As of October 2011, the restoration of the home is near completion. The home is open one day annually in the fall for tours, along with the other Century of Progress homes nearby (all except one having been restored or restoration in-progress).

All content from Kiddle encyclopedia articles (including the article images and facts) can be freely used under Attribution-ShareAlike license, unless stated otherwise. Cite this article:
Armco-Ferro House Facts for Kids. Kiddle Encyclopedia.