Beverly Shores is a town in Pine Township, Porter County, Indiana, United States, about 36 miles (58 km) east of downtown Chicago. The population was 613 at the 2010 census.

The Frederick H. Bartlett Company, at that time one of Chicago's largest real-estate developers, bought 3,600 acres (1,500 ha) in the area in 1927, and plotted thousands of homesites. He named the prospective development Lake Shore, North Shore Beach and South Shore Acres. The Great Depression dampened its prospects, and many of the plots were never built on. 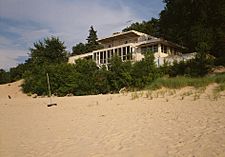 The rear view of the Florida Tropical House, part of the World's Fair Houses located in Beverly Shores.

Robert Bartlett, Frederick Bartlett's brother, purchased the properties in 1933, He named the entire development after his daughter Beverly,and continued to develop its infrastructure with roads, a school, a golf course, and a hotel. He purchased and relocated sixteen structures from Chicago's 1933-34 Century of Progress World's Fair, four of which were transported by barges on Lake Michigan.

The community was incorporated in 1947. After World War II, a number of industrial developments, including Burns Harbor, were built to the west, and by the 1950s environmental organizations had begun to push for preservation of the area. The Indiana Dunes National Lakeshore was established in 1966. During the 1970s, there was a movement to purchase all the homes in Beverly Shores and incorporate the entire town into the National Lakeshore. This initiative did not succeed, but many local properties were acquired, especially those in the wetlands that constitute the southern portion. The acquisition process is ongoing. The owners of lots fronting on the beach were granted lifetime leasebacks with the proviso that the property would revert to the National Lakeshore; many of these houses have since been demolished.

The 1970s saw a period of record high lake levels and beach erosion; the owners of lakefront properties often responded by dumping large quantities of concrete blocks (riprap) onto the sand in front of their houses, which continue to mar the beach. The beach is now conspicuously public, although nearby parking is limited.

A resurgence of development took place during the 1990s and 2000s, when many million-dollar-plus houses were built on the dunes near the lakefront. In the early 2000s, excessive levels of arsenic, boron, lead, and manganese were found in wells in the nearby town of Pines, and pipelines delivering Lake Michigan water treated by Michigan City were extended into Beverly Shores. This time period also saw explosive growth of the local white-tailed deer population, a problem that has polarized its residents.

Easily accessible from Chicago, Beverly Shores is a second home to many Chicagoans who are referred to locally as some-timers. Both full-time and some-time residents come together for community activities such as ice skating on the frozen pond during Winterfest, the 5k Necktie Race held on Father's Day, and the annual summertime event the Fireman's Ball which raises money for the volunteer fire department.

Beverly Shores has always enjoyed the reputation of being a "gay-friendly" community. For example, the "Last Outpost" and "Los Compadres" restaurants were, in their heyday, major points of interest in northwest Indiana for the homosexual community. Along with the acceptance of gay culture, Beverly Shores has long been a haven for artists.

In the recent years up to 2008, there were no local Beverly Shores eating or drinking establishments. Grecco's and the Red Lantern were two restaurants down by the beachfront but they closed a long time ago. In November 2008, the old Bruno's Bar was reopened after much renovation under the name Bartlett's, a nod to the developer, Robert Bartlett. Bartlett's is owned and operated by experienced restaurateurs who call Beverly Shores home. In 2010, the Rolling Stonebaker, a Studebaker fire truck converted into a wood-fired pizzeria, opened in Beverly Shores. In 2011, The Rolling Stonebaker was named the best pizza in the state of Indiana by Food Network Magazine.

Beverly Shores attracts many visitors, particularly nature enthusiasts, cyclists and bird watchers, who come to enjoy the beaches and the marshlands. Overnight lodging options are limited but visitors who wish to stay the night can reserve a campsite at Dunewood Camp.

There were 312 households of which 12.8% had children under the age of 18 living with them, 54.8% were married couples living together, 5.4% had a female householder with no husband present, 1.6% had a male householder with no wife present, and 38.1% were non-families. 32.7% of all households were made up of individuals and 15.4% had someone living alone who was 65 years of age or older. The average household size was 1.96 and the average family size was 2.45.

There were 340 households out of which 11.2% had children under the age of 18 living with them, 54.4% were married couples living together, 4.1% had a female householder with no husband present, and 37.1% were non-families. 29.7% of all households were made up of individuals and 10.9% had someone living alone who was 65 years of age or older. The average household size was 2.08 and the average family size was 2.53.

Beverly Shores buildings in the National Register of Historic Places

All content from Kiddle encyclopedia articles (including the article images and facts) can be freely used under Attribution-ShareAlike license, unless stated otherwise. Cite this article:
Beverly Shores, Indiana Facts for Kids. Kiddle Encyclopedia.