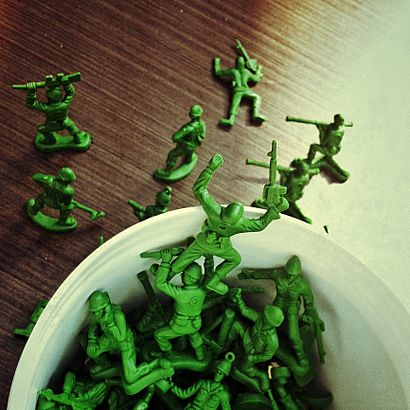 Army men are sold in plastic bags or buckets, and often include different colors such as green, tan, or gray, to represent different sides. They have a lot of different kinds of weapons, from World War II to the current era. These include rifles, machine guns, submachine guns, sniper rifles, pistols, grenades, flame throwers, and bazookas. They may also have radio men, minesweepers, and men armed with bayonets. Army men are sometimes packaged with additional accessories including tanks, jeeps, helicopters, half tracks, artillery, helicopters, jets, and buildings. Their vehicles are usually manufactured in the same size, to save money.

The first American plastic toy soldiers were made by Bergen Toy & Novelty Co. (Beton for short) in 1938.

All content from Kiddle encyclopedia articles (including the article images and facts) can be freely used under Attribution-ShareAlike license, unless stated otherwise. Cite this article:
Army men Facts for Kids. Kiddle Encyclopedia.