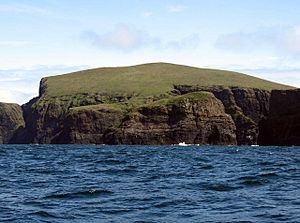 The western cliffs of Mingulay with Arnamuil in the centre

Arnamul (Scottish Gaelic: Arnamuil) is a stack off the west coast of Mingulay in the Western Isles, Scotland. Although precipitous, sheep were grazed on its relatively flat summit during the human occupation of Mingulay.

Haswell-Smith (2004) states that the name means "erne mound". Mac an Tailleir (2003) does not provide a derivation, although he quotes "Arnabol" as meaning "eagle farm" or "Arne's farm" from the Norse.

All content from Kiddle encyclopedia articles (including the article images and facts) can be freely used under Attribution-ShareAlike license, unless stated otherwise. Cite this article:
Arnamul Facts for Kids. Kiddle Encyclopedia.