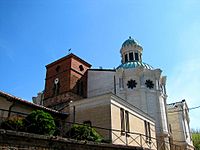 Ars-sur-Formans is a commune. It is found in the Auvergne-Rhône-Alpes region in the Ain department in the east of France. In 2009, 1,326 people lived in the commune. The inhabitants are the Arsois. The most important monuments in the commune are the Ars basilica, built in 1862, and the Presbytère du curé d'Ars, located at the side of the basilica, and which contains a relic (his heart) of Jean-Marie Vianney, curé of Ars in the 19th century. The commune is twinned with Freihalden in Germany since 1977.

All content from Kiddle encyclopedia articles (including the article images and facts) can be freely used under Attribution-ShareAlike license, unless stated otherwise. Cite this article:
Ars-sur-Formans Facts for Kids. Kiddle Encyclopedia.