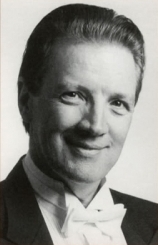 Arthur Davies (11 April 1941 – c. 9 August 2018) was a Welsh tenor. He had an international performance career from the 1970s through the 1990s. He performed leading roles with The Royal Opera in London, the Welsh National Opera, the Scottish Opera, and the English National Opera.

Davies was born in Wrexham, Wales. He died in August 2018 at the age of 77. His death was announced on August 9.

All content from Kiddle encyclopedia articles (including the article images and facts) can be freely used under Attribution-ShareAlike license, unless stated otherwise. Cite this article:
Arthur Davies (tenor) Facts for Kids. Kiddle Encyclopedia.