Hornblow was the son of Arthur Hornblow Sr. (1865–1942), a writer who edited Theatre Magazine in New York City. (He allowed a version of his last name be used by C. S. Forester for the fictional sea captain Horatio Hornblower after meeting writer Forester at a New York cocktail party.)

Hornblow graduated from DeWitt Clinton High School, New York City, in 1911, before studying at Dartmouth College and New York Law School, and was a member of the fraternity Theta Delta Chi. He served in counter-intelligence during World War I, and then tried his hand at playwriting. He was then hired as a production supervisor by Sam Goldwyn at Paramount in 1927.

Initially, he specialized in the popular screwball comedies, eventually giving Billy Wilder his first directing job, and producing several films starring Bob Hope. These included The Cat and the Canary (1939), The Ghost Breakers (1940) and Nothing But the Truth (1941). In 1942 he moved to MGM where he produced Gaslight and several film noir. In the 1950s, now an independent producer rather that a studio employee, he worked on the musical Oklahoma and the courtroom drama Witness for the Prosecution, directed by his former Paramount colleague, Billy Wilder.

As a producer he was nominated for an Academy Award 'Best Picture' Oscar four times, but failed to win. 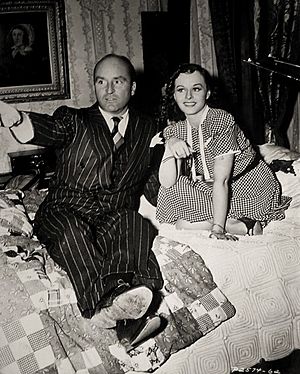 Books by Arthur and Leonora Hornblow

The Hornblows, Frith, and Random House collaborated to produce numerous sequels, Birds Do the Strangest Things (1965), and so on.

All content from Kiddle encyclopedia articles (including the article images and facts) can be freely used under Attribution-ShareAlike license, unless stated otherwise. Cite this article:
Arthur Hornblow Jr. Facts for Kids. Kiddle Encyclopedia.