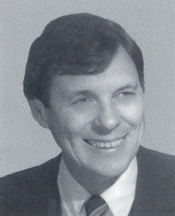 Arthur Ravenel Jr. (born March 29, 1927) is an American businessman and a Republican politician. He was born in Charleston, South Carolina. He served as a member of the United States House of Representatives from South Carolina's 1st congressional district. He served from 1987 through 1995.

Ravenel Jr. decided not to run for re-election in 1994, to run for Governor instead, but lost in the Republican primaries to David Beasley.

In 2005, Ravenel Jr. suffered from Guillain–Barré syndrome. The Arthur Ravenel Jr. Bridge, near the Cooper River, is named after him.

Ravenel is a member of Moultrie Camp, Sons of Confederate Veterans, and is a supporter of the Confederate flag being flown at the South Carolina statehouse. He made controversy at a rally for the flag in 2000 when he referred to the NAACP as the “National Association for Retarded People”. Ravenel upset even more people after he apologized to mentally handicapped people for comparing them to the NAACP.

All content from Kiddle encyclopedia articles (including the article images and facts) can be freely used under Attribution-ShareAlike license, unless stated otherwise. Cite this article:
Arthur Ravenel Jr. Facts for Kids. Kiddle Encyclopedia.