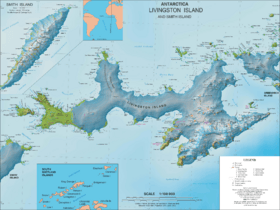 Aspis Island is a small, low-lying, ice-free island rising to 15 metres (49 ft), easternmost in the Dunbar group off the northwest coast of Varna Peninsula, Livingston Island in the South Shetland Islands, Antarctica.

The feature is named after the Aspis, a small musical dragon, often portrayed in medieval literature. 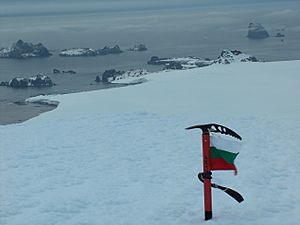 Aspis Island (showing next behind the second left point, the Organpipe) from Miziya Peak, with Zavala Island in the foreground and Zed Islands in the background.

All content from Kiddle encyclopedia articles (including the article images and facts) can be freely used under Attribution-ShareAlike license, unless stated otherwise. Cite this article:
Aspis Island Facts for Kids. Kiddle Encyclopedia.