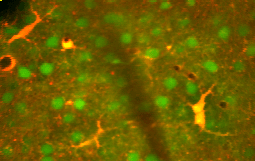 Astrocytes (red-yellow) among neurons (green) in the living cerebral cortex

Astrocytes are characteristic star-shaped glial cells in the brain and spinal cord. They are also known collectively as astroglia.

The proportion of astrocytes in the brain varies. Studies have found that the astrocyte proportion varies by region from 20% to 40% of all glia.

Astrocytes do many things. They help the endothelial cells of the blood–brain barrier, provide nutrients to the nervous tissue, keep extracellular ions in balance. They also help repair the brain and spinal cord after traumatic injuries.

Research since the mid-1990s has shown that astrocytes release Ca2+ ions, and adjust brain functions. Such discoveries have made astrocytes an important area of research in neuroscience.

All content from Kiddle encyclopedia articles (including the article images and facts) can be freely used under Attribution-ShareAlike license, unless stated otherwise. Cite this article:
Astrocyte Facts for Kids. Kiddle Encyclopedia.