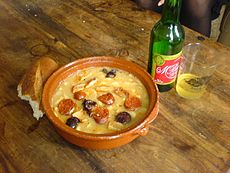 Fabada Asturiana with Sidra, a typical dish of Asturias

Asturian cuisine refers to the typical dishes and ingredients found in the cuisine of the Asturias region of Spain.

Asturias is especially known for its seafood, such as fresh squid, crab, shrimp and sea bass. Salmon are caught in Asturian rivers, notably the Sella; the first fish of the season is called campanu (Bable word for campana), a bell tolled to signal the first catch. 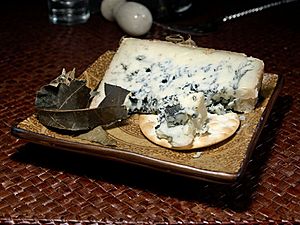 Asturian cheeses, especially Cabrales, are also famous throughout Spain and beyond; Cabrales is known for its pungent odour and strong flavour. Asturias is often called "the land of cheeses" (el pais de los quesos) due to the product's diversity and quality in this region. Other famous cheeses are: 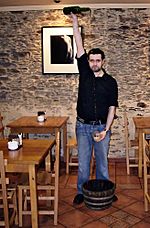 Asturian cider being poured in the traditional manner.

Apple groves foster the production of the traditional alcoholic drink, a natural cider (sidra). It is a very dry cider, and unlike French or English natural ciders, uses predominantly acidic apples, rather than sweet or bittersweet. The proportions are: acidic 40%, sub-acidic 30-25%, sweet 10-15%, bittersweet 15-20%, bitter 5%.

Sidra is traditionally poured in by an expert server (or escanciador): the bottle is raised high above his or her head to oxygenate the brew as it moves into the glass below. A small amount (~120ml) is poured at a time (called a culín), as it must be drunk immediately before the sidra loses its carbonation. Any sidra left in the glass is poured onto a woodchip-strewn floor or a trough along the bottom of the bar.

All content from Kiddle encyclopedia articles (including the article images and facts) can be freely used under Attribution-ShareAlike license, unless stated otherwise. Cite this article:
Asturian cuisine Facts for Kids. Kiddle Encyclopedia.