Atlas was a missile built by the Convair Division of General Dynamics.

It was originally designed as an ICBM in the late 1950s. It launched the Mercury project space capsules and became the foundation for a family of successful space launch vehicles now built by United Launch Alliance. The Atlas rocket family is today used as a launch platform for commercial and military satellites, and other spacecraft.

Mercury Atlas 9 rocket and spacecraft on Launch Complex 14 at Cape Canaveral, FL in 1963.

The missile was originally given the military designation "XB-65", thus making it a bomber; from 1955 it was redesignated "SM-65" and, from 1962, it became "CGM-16". This letter "C" stood for "coffin" or "Container", because the rocket was stored in a semi-hardened container; it was prepared for launch by being raised and fueled in the open. The Atlas-F (HGM-16) was stored vertically underground, but launched after being lifted to the surface. 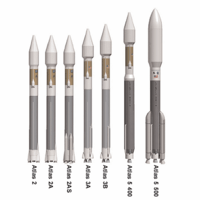 All content from Kiddle encyclopedia articles (including the article images and facts) can be freely used under Attribution-ShareAlike license, unless stated otherwise. Cite this article:
Atlas (missile) Facts for Kids. Kiddle Encyclopedia.