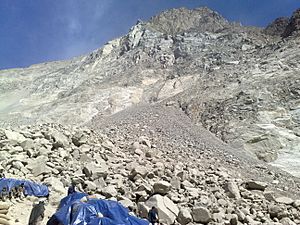 Closeup of the landslide

Attabad Lake (sometimes called Gojal Lake) is a lake in Hunza Valley in northern Pakistan. The lake was created by a landslide which happened in the village of Attabad on 4 January 2010. The landslide killed twenty people. It blocked the flow of the Hunza River for five months.

By the first week of June 2010, the new lake was 13 miles (21 km) long and over 330 feet (100 m) deep. At that time, it flowed over the landslide dam, completely submerging lower Shishkat and partly flooding Gulmit. The subdivision of Gojal has the greatest number of flooded buildings, over 170 houses and 120 shops. The residents also had shortages of food and other items due to the blockage of the Karakoram Highway. By June 4 water outflow from the lake had increased to 3700 cu ft/sec.

All content from Kiddle encyclopedia articles (including the article images and facts) can be freely used under Attribution-ShareAlike license, unless stated otherwise. Cite this article:
Attabad Lake Facts for Kids. Kiddle Encyclopedia.