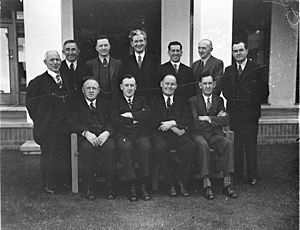 In 1931 Jack Lang, the Premier of New South Wales, announced the "Lang Plan". This plan would reduce the effects of the Great Depression. The main feature of the plan was to stop making loan repayments to foreign banks. This was the opposite of the policy of the federal Labor government led by James Scullin. As a result, Lang's supporters, led by Jack Beasley and Eddie Ward, were forced out of the federal Caucus.

This led to a split between the Federal and State leaders of the Labor party. In 1931 Lang's supporters voted with the United Australia Party Opposition in the House of Representatives to bring down the Scullin government. This caused an early election. The New South Wales Branch ran candidates as the Australian Labor Party (New South Wales). They were known as "Lang Labor" candidates. Supporters of the federal party (led in New South Wales by Ted Theodore and Ben Chifley) were known as Federal Labor candidates.

The elections were a huge defeat for Labor, but most of the Lang members had safe working class seats and survived. Ward was narrowly defeated in East Sydney. (He was re-elected at a by-election in 1932). Theodore and Chifley were both defeated, and Federal Labor won only three seats in New South Wales. At the 1934 federal elections Federal Labor won only one seat (Newcastle).

In 1935 John Curtin became the new federal Labor leader. In February 1936 he brought about a reconciliation with the New South Wales Branch. At the 1937 elections Labor ran as a united party in New South Wales.

All content from Kiddle encyclopedia articles (including the article images and facts) can be freely used under Attribution-ShareAlike license, unless stated otherwise. Cite this article:
Australian Labor Party (NSW) Facts for Kids. Kiddle Encyclopedia.