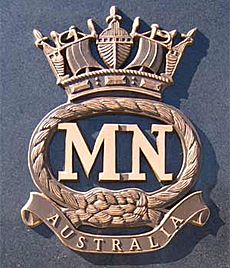 The Australian Merchant Navy Memorial is a memorial honouring the Australian Merchant Navy's involvement in World War I and World War II. It is located in Kings Park, on the northern shore of Lake Burley Griffin in Canberra, the national capital city of Australia. Its location at the shore of the lake represent's the Merchant Navy's relationship with water. It was unveiled on 7 October 1990 by Bill Hayden AC, Governor-General of Australia. A memorial service is held on the first Sunday on or after 21 October each year. 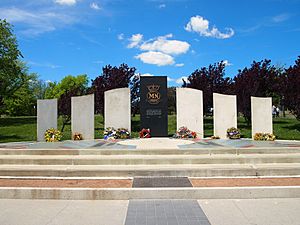 The memorial was designed by Daryl Jackson Alastair Swayn architects and symbolises the Merchant Navy and the sea. It consists of seven columns, a dias, concrete drums, and a flagpole.

The inscription on the memorial reads:

"In honour of those of the Australian Merchant Navy who gave their lives for their country and have no known grave but the sea. They will be remembered for ever more. 1914-1918 1939-1945."

All content from Kiddle encyclopedia articles (including the article images and facts) can be freely used under Attribution-ShareAlike license, unless stated otherwise. Cite this article:
Australian Merchant Navy Memorial Facts for Kids. Kiddle Encyclopedia.