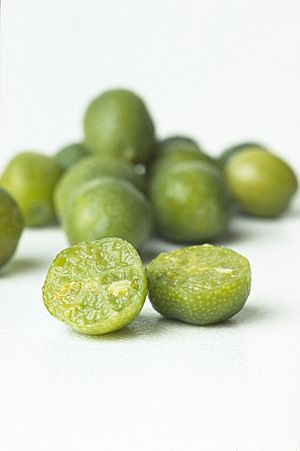 The Australian Outback Lime, a cultivar of the desert lime (C. glauca)

Australian limes are species of the plant genus Citrus that are native to Australia and Papua New Guinea.

These species were formerly included in the genera Microcitrus and Eremocitrus. They have been used as a food source by indigenous Australians as well as early settlers and are used in modern Australian cuisine, including marmalade and sauces. 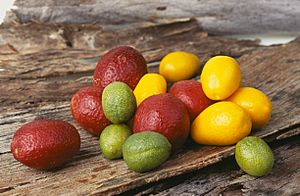 A number of cultivars have been developed in recent years. These can be grafted on to standard citrus rootstocks. They may be grown as ornamental trees in the garden or in containers. Grafted standards are available for some varieties. The cultivars include:

Citrus species in Papua New Guinea have not been extensively studied, and there are likely to be more species than are listed here.

An identification key (p. 6 or 338) exists for the known Australian limes (not including species from Papua New Guinea). The leaves of some species broaden dramatically with age.

All content from Kiddle encyclopedia articles (including the article images and facts) can be freely used under Attribution-ShareAlike license, unless stated otherwise. Cite this article:
Australian lime Facts for Kids. Kiddle Encyclopedia.