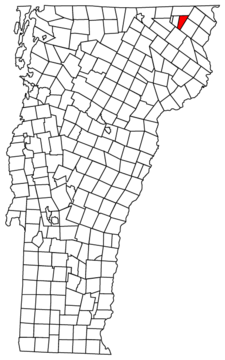 It is one of at least five locations in Vermont known as Averys Gore (or Avery's Gore), the others being located in Addison County, Chittenden County, Franklin County, and Windham County. This page deals specifically with the location in Essex County.

In Vermont, gores and grants are unincorporated portions of a county which are not part of any town and have limited self-government (if any, as some are uninhabited). The population was 0 at the 2010 census. However, the gore does have a few hundred feet of dirt road and one building or structure, on the North Branch of the Nulhegan River by the Lewis town line. More prominently, Gore Mountain, one of the 50 highest in the state, is in the eastern portion of Averys Gore.

Averys Gore is named for Samuel Avery, a Westminster deputy sheriff and jailkeeper. Avery received roughly 52,000 acres (21,000 ha) in eight separate gores and grants in the 1790s as compensation for land he had owned in a part of the state previously claimed by New York.

According to the United States Census Bureau, the gore has a total area of 17.6 square miles (45.5 km2), of which 0.035 square miles (0.09 km2), or 0.19%, is water. The north side of the gore drains via several brooks into the Coaticook River, part of the St. Lawrence River basin, while the rest of the gore drains south via the North Branch of the Nulhegan River or the Black Branch of the Nulhegan and is part of the Connecticut River basin.

As of the 2010 census, there are no people living in the gore.

Sources are inconsistent on whether the name of the gore is "Averys Gore" or "Avery's Gore" (i.e. with the apostrophe or without). State of Vermont records seem to have consistently used the apostrophe, but independent sources have been less consistent.

The original charter (as reproduced in State Papers of Vermont, Volume Two: Charters Granted by the State of Vermont, VT Secretary of State, 1922, pp 9–11) merely mentions the boundaries of the tract of land, along with two others included in the same charter, granting them to Samuel Avery, but not mentioning any names for the tracts of land.

State Papers of Vermont, Volume One: Index to the Papers of the Surveyors-General (VT Secretary of State, 1918) lists all the gores granted to Samuel Avery collectively as "Avery's Gores (Alias Vermont Grants to Samuel Avery)" (p. 31).

The apostrophe is omitted, however, in Vermont Place-Names: Footprints of History by Esther M. Swift (The Stephen Greene Press, 1977, pp 198–9), in the Vermont Atlas and Gazetteer (Delorme, 9th ed., 1996, p. 55), and by the federal Board on Geographic Names.

Overall, most sources tend to use the apostrophe, and the state seems to have used it consistently, thus that appears to be the more accepted form.

All content from Kiddle encyclopedia articles (including the article images and facts) can be freely used under Attribution-ShareAlike license, unless stated otherwise. Cite this article:
Averys Gore, Vermont Facts for Kids. Kiddle Encyclopedia.