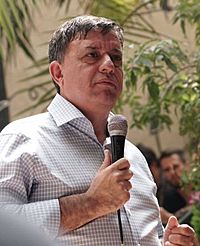 He was leader of the Israeli Labor Party between 2017 and 2019 and former leader of The Zionist Union. He was CEO of the telecommunications company Bezeq from 2007 to 2013. He was Minister of Environmental Protection between 2015 and 2016.

All content from Kiddle encyclopedia articles (including the article images and facts) can be freely used under Attribution-ShareAlike license, unless stated otherwise. Cite this article:
Avi Gabbay Facts for Kids. Kiddle Encyclopedia.