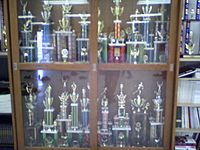 Some of the trophies earned by the NJROTC unit of Port Charlotte High School.

An award is something given to a person or group of people to recongise that they have done something very good. Usual awards are medals, trophies or ribbons, for example. Sometimes awards are called prizes, such as the Nobel Prize.

Awards can be given by any person or institution. Governments and militaries often give awards to their citizens for contributions they have made to the nation. This recognition can be given during the person's lifetime or even after they have died. In the United States if a military member receives a posthumous award it is generally presented to their family members or next of kin. This can include medals like the Medal of Honor; promotions to the next higher grade or naming a building or ship after them.

Some entertainment awards are:

All content from Kiddle encyclopedia articles (including the article images and facts) can be freely used under Attribution-ShareAlike license, unless stated otherwise. Cite this article:
Award Facts for Kids. Kiddle Encyclopedia.