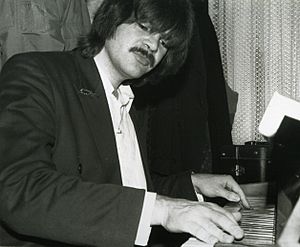 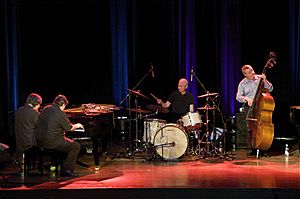 Axel Zwingenberger (born 7 May 1955, Hamburg, Germany) is a blues and boogie-woogie pianist He is said to be one of the best boogie-woogie musicians in the world.

Zwingenberger was born in Hamburg, Germany. He had eleven years of piano training. In 1973 he listened to recordings of boogie-woogie pianists Albert Ammons, Meade Lux Lewis, and Pete Johnson. He joined piano playing partners Hans-Georg Moeller, Vince Weber and Martin Pyrker. In 1974, he played at the First International Blues-and-Boogie Woogie Festival of the West German Radio Station in Cologne which was followed by Hans Maitner's annual festival Stars of Boogie Woogie in Vienna.

Being a steam engine fan since childhood he also edited a book with his own photos of steam engines. (Axel Zwingenberger, Vom Zauber der Züge - The Magic of Trains photo book - ISBN: 3-926398-02-7)

All content from Kiddle encyclopedia articles (including the article images and facts) can be freely used under Attribution-ShareAlike license, unless stated otherwise. Cite this article:
Axel Zwingenberger Facts for Kids. Kiddle Encyclopedia.