Axminster railway station is south-west of the compact town centre of Axminster in Devon, England. Opened by the London and South Western Railway (LSWR) in 1860, it is served by South Western Railway’s London to Exeter services on the West of England Main Line. It is 144 miles 41 chains (232.6 km) down the line from London Waterloo. 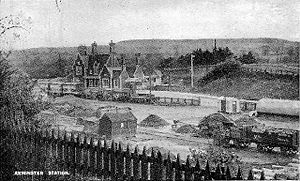 The station in the early years of the twentieth century.

The station opened on 19 July 1860 by LSWR with its Exeter Extension from Yeovil Junction to Exeter Queen Street. Main offices and a goods shed were east of the line and a small engine shed existed for the locomotive kept here to help early trains up the 1-in-80 (1.25%) climb through Seaton Junction to Honiton. A signal box was built in 1875 (at the south end of the westbound platform).

The established service pattern was interposed express trains between London Waterloo and other Devon final destinations or Cornwall and local services between Salisbury or Yeovil and Exeter. In 1903 Axminster became a junction when the Lyme Regis branch line was opened. A bay platform (terminus) was built (on the west side) yet the branch climbed at 1 in 80 (1.25%) to cross the main line south of the station by a bridge. A short 1-in-40 connection ran from the goods yard directly to the branch removed in 1915. The engine shed was demolished to make room for the new branch, but a new coal stage and water tank was built next to the terminus. The lever frame in the signal box was extended in 1903 to accommodate the new line, and three years later full signalling on the branch required the building to be extended.

In 1923 the LSWR became part of the Southern Railway during the Grouping of 1923. The platforms were lengthened in the 1930s to accommodate longer trains and the new Axminster Carpets factory making Axminster carpets opened alongside the goods yard in 1937.

On 1 January 1948 the Southern Railway was nationalised to become the Southern Region of British Railways. January 1963 saw the all the lines in the area transferred to the Western Region and this was soon followed by the Reshaping of British Railways report. On 29 November 1965 the Lyme Regis branch line was closed; goods traffic had been withdrawn in 1960. On 11 June 1967 the main line was rationalised – Axminster was now in the middle of a 15.26 miles (24.56 km) single-track section between Chard Junction and Honiton.

In the late 1980s the line found itself part of British Rail’s Network SouthEast sector, which invested in new Class 159 trains and extended the platform southwards to remove the need of passengers to pass beneath a narrow bridge arch to reach the 1930s extension at the north end of the site. The privatisation of British Rail in the 1990s saw the line and station franchised to South West Trains.

Work started February 2009 on a £20 million project which included building a new platform on the site of the disused platform, installing a new footbridge, lifts and waiting shelter, strengthening seven bridges and 20 culverts, installing 12 new signals, replacing three miles of signal cables and modernising the signalling panel at Chard Junction signal box and completed that December with a 3-mile (4.8 km) passing loop incorporating the station tracks. This allowed the previous sparse, irregular timetable to be replaced with a regular hourly frequency; trains being timetabled to pass at Axminster.

The small building at the end of the main platform since 2009 reopened as a café.

Since December 2012 Rail Gourmet UK has had its satellite (auxiliary) service centre on site. An at-seat catering service serves many services from Axminster to Waterloo by hosts based at Axminster on morning train services. The service centre doubles as a turn-around station for its staff based at Salisbury.

The station is on the west/south-west edge of the compact but linear town centre. The main building was designed by the LSWR's architect Sir William Tite and Edward Clifton in mock gothic style. An old parcels office next door houses the café. Immediately south of the main building is the 2009-built footbridge between the two platforms. Unusually trains ran on the right but in late 2012, this was reversed: trains now run on the left. 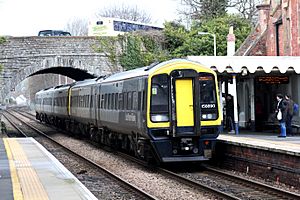 All content from Kiddle encyclopedia articles (including the article images and facts) can be freely used under Attribution-ShareAlike license, unless stated otherwise. Cite this article:
Axminster railway station Facts for Kids. Kiddle Encyclopedia.