Kids Encyclopedia Facts
Not to be confused with Exminster.

Axminster is a market town and civil parish on the eastern border of the county of Devon in England. It is 28 miles (45 km) from the county town of Exeter. The town is built on a hill overlooking the River Axe which heads towards the English Channel at Axmouth, and is in the East Devon local government district. At the 2001 census, it had a population of 5,626, increasing to 5,761 at the 2011 census. The town contains two electoral wards (town and rural) the total sum of both wards being a population of 7,110. The market is still held every Thursday.

Axminster gave its name to a type of carpet. An Axminster-type power loom is capable of weaving high quality carpets with many varying colours and patterns. While Axminster carpets are made in the town by Axminster Carpets Ltd, this type of carpet is now manufactured all over the world as well.

The town dates back to the Celtic times of around 300 BC. It lies on two major Roman roads: the Fosse Way from Lincoln to Seaton, and the Dorchester to Exeter road. There was a Roman fort on the crossroads at Woodbury Farm, just south of the present town. Axminster appears on the Peutinger Map, one of only 15 British towns on that Roman era map.

Axminster was recorded in the late 9th century as Ascanmynster and in the Domesday Book of 1086 as Aixeministra. The name means "monastery or large church by the River Axe" and is a mixture of languages; the river name Axe has Celtic origins and mynster is an Old English word.

The history of the town is very much linked to the carpet industry, started by Thomas Whitty at Court House near the church in 1755. The completion of the early hand tufted carpets was marked by a peal of bells from the parish church as it took a great amount of time and labour to complete them.

In 1210, a charter was granted to the town that included the right to hold a weekly cattle market which took place in the market square until it was moved to Trinity Square in 1834. It then moved in October 1912 to a site off South Street where it was held for 94 years. It finally closed in 2006 in the aftermath of the 2001 United Kingdom foot-and-mouth outbreak. A building on the site then continued to be used for a general auction until all the buildings were demolished and replaced by a housing development. 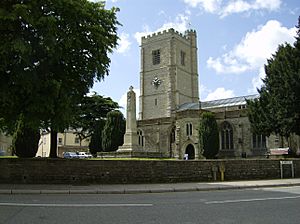 The town was on the coaching route from London to Exeter. In 1760 a coaching inn named The George Hotel was opened on the corner of Lyme Street and Chard Street on the site of an old inn called the Cross Keys that was destroyed by fire in 1759. Over 16 coaches a day would stop at the hotel in its heyday for refreshments and to change horses, the building still stands but it is currently unoccupied. Axminster was on the route of The Trafalgar Way which is the name given to the historic route used to carry dispatches with the news of the Battle of Trafalgar overland from Falmouth, Cornwall to the Admiralty in London in 1805 and there is a plaque commemorating this fact in the town centre.

Part of the parish of Axminster had historically been an exclave of Dorset until the Counties (Detached Parts) Act 1844, when it was fully incorporated into Devon.

Axminster railway station was opened on 19 July 1860, with the London and South Western Railway (LSWR) offering direct services between Central Station in Exeter and Yeovil. The station building was designed by the LSWR's architect Sir William Tite in mock gothic style. In 1903, the branch line from Axminster to Lyme Regis was opened. This branch line was closed with the Beeching cuts, in the 1960s. One engine has been preserved on the Bluebell Line, in Sussex, while the station was dismantled and reconstructed at New Alresford, on the Watercress Line, in Hampshire.

Axminster is the southern starting point of the Taunton Stop Line, a World War II defensive line consisting of pillboxes and anti-tank obstacles, which runs north to the Somerset coast near Highbridge.

Nearby Kilmington was used as a location for the 1998 LWT adaptation of Tess of the d'Urbervilles. The celebrity chef and TV presenter Hugh Fearnley-Whittingstall has his River Cottage H.Q. at a 60-acre (24 ha) farm in the Axe valley. He has since purchased an old inn that once provided the ballroom of the town, now converted to an organic produce shop/market and canteen.

The hamlet of Abbey Gate lies to the south of the town near the A35 and A358 intersection. 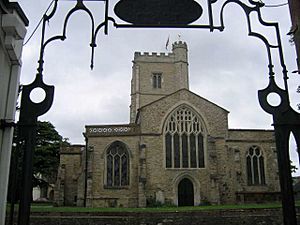 The town has Cloakham Lawns, the Axe Valley Sports Centre and Flamingo Swimming Pool, a library, several churches and a museum of local history. Shops include two supermarkets, a small department store, Trinity House, and several independent retailers. The Guildhall is a theatre with meeting rooms that hosts many events and clubs such as Axminster Drama Club and Axminster Operatic Society. The town is also home to a small, local hospital. 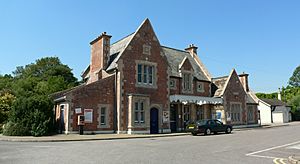 Axminster is at the crossroads of the A358, which links with the A303 at Ilminster, and the A35 from Southampton to Honiton, which has been diverted by a bypass to the south of the town.

Axminster railway station is on the West of England Main Line that runs from Exeter via Salisbury to London Waterloo.

All content from Kiddle encyclopedia articles (including the article images and facts) can be freely used under Attribution-ShareAlike license, unless stated otherwise. Cite this article:
Axminster Facts for Kids. Kiddle Encyclopedia.