Boeing B-29 Superfortress facts for kids 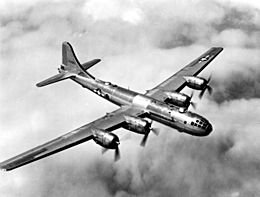 B-29 Flying Superfortress in flight.

The Boeing B-29 Superfortress was a heavy bomber aircraft with four engines used by the United States Army Air Forces in World War II, and by other countries' military after that. The name "Superfortress" came from its famous previous model, the B-17 Flying Fortress.

The B-29 Boeing Model 345 was one of the biggest aircraft to serve during World War II. It was one of the most advanced bombers of its time. It was the most used aircraft in the U.S. bombing against Japan in the final months of World War II, and B-29s carried the atomic bombs that destroyed Hiroshima and Nagasaki. The B-29 stayed in service for a long time after the war ended. By the time it was retired in the 1960s, some 3,900 planes had been built.

All content from Kiddle encyclopedia articles (including the article images and facts) can be freely used under Attribution-ShareAlike license, unless stated otherwise. Cite this article:
Boeing B-29 Superfortress Facts for Kids. Kiddle Encyclopedia.